Today we grouted the little test pieces of mosaic Mum and I were playing with: 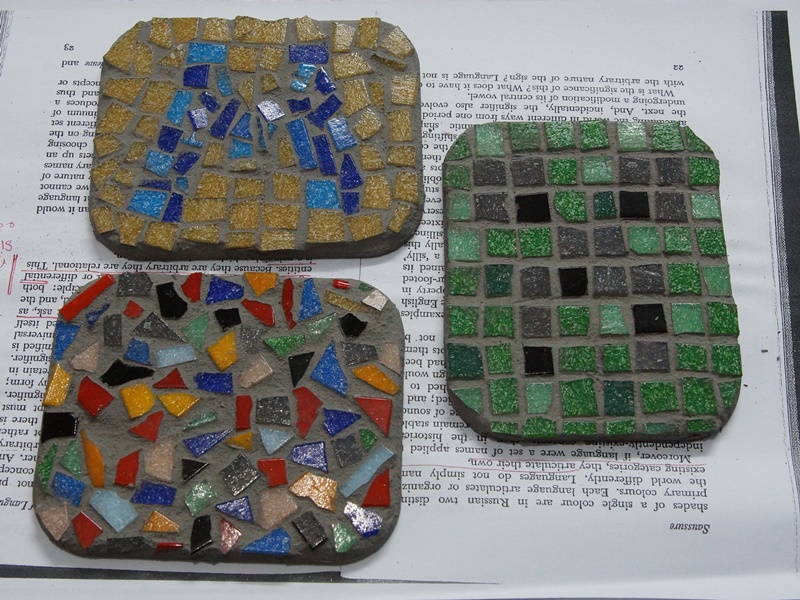 They haven’t quite finished drying yet, so they haven’t been polished.

Not the most artistic, but we had fun 🙂

esterday I took the day off so Mum and I could do some serious shopping.  Except neither of us is very good at serious shopping, so it quickly devolved into a bit of vague wandering around the shops deciding we didn’t actually want to buy anything anyway, interspersed with many many breaks for tea and cake.  Which really is the only way to survive serious shopping 😉  There were many bus trips too, as I tried to navigate us to all the places we wanted to visit with the minimum of walking (which was a bit of a challenge to me, to figure out the most efficient combination of buses to get to places I’d normally just walk to).

One of our many stops was at Hands, to pick up some more mosaic supplies so Mum could have a go (she’s been wanting to learn for ages, because she’s got a couple of big projects in mind, so I said I’d teach her what I learnt at the class the other day).  Once we got home, we spent a constructive couple of hours playing with tiles and glue, producing a couple of coasters (well, gluing the tiles on them, anyway – they’ve still got to be grouted etc, which has to wait a day or two).  I think Mum had plans of working on a couple more today.

Then, after getting distracted for way too long by “testing” the digital microscope (which was brilliant fun – even my totally non-geek mother was completely geeking out about it ;-)), and a very quick dinner, I invited her along to my Toastmasters meeting.  Luckily I wasn’t giving a speech, because having Mum watching me upped the nervousness quotient enormously – just having to stand up and report back on the evaluation I was doing for someone else was bad enough!  But I think she really enjoyed the meeting, and getting to meet some of the people I talk about (I know they were all really keen to meet her!)

So it was a very full day!  Loads of fun, even if I do feel more tired after my day off than if I’d been at work (although that may be more to do with my $%#@ neighbours turning on their car radio at high volume at some horrific hour this morning).

t may look a bit underwhelming next to yesterday’s photos of the amazing Crack’d for Christchurch mosaics, but I’m happy enough with how my little attempt is progressing, for a first effort.  I finally got round to doing the grouting this morning, and it’s now drying, ready to be polished tonight.  It was, as promised, a very messy process, which managed to escape the bounds of the newspapers I thought I’d covered everything with (lesson learnt – next time just do it outside). 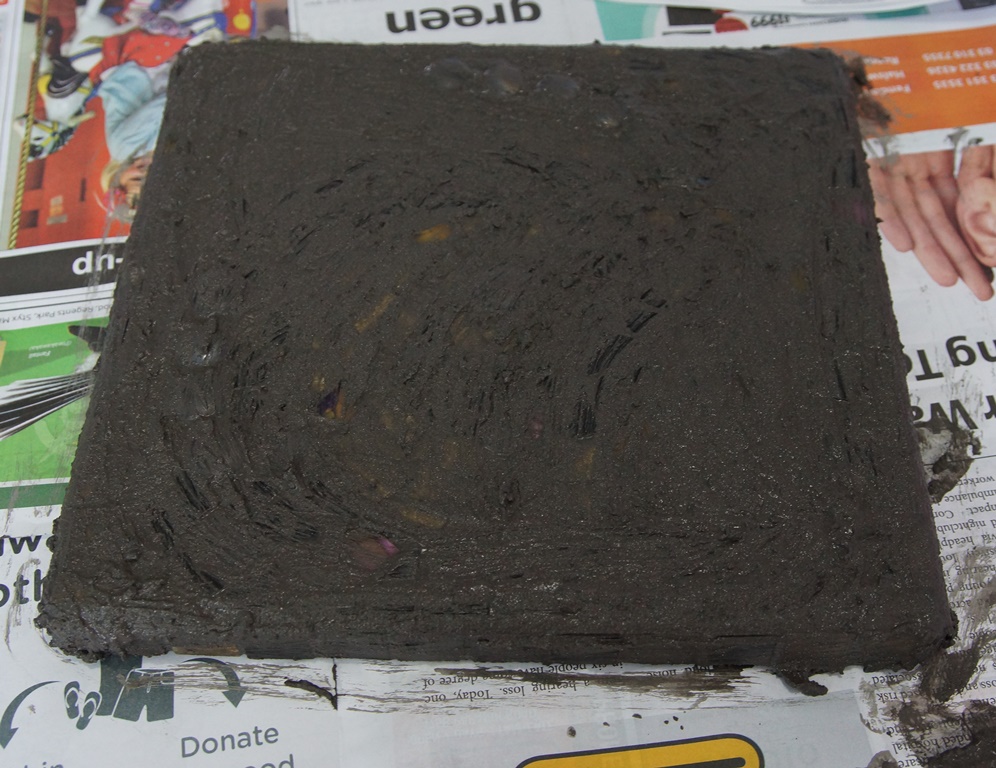 The mud pie stage – totally covered with a thick layer of grout. 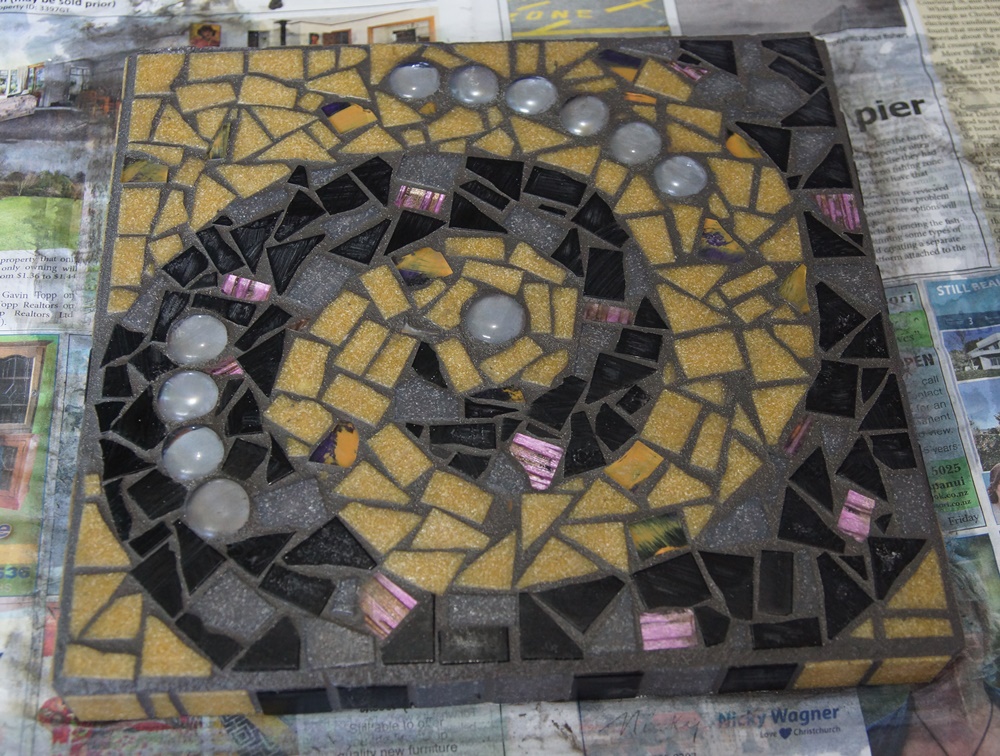 Half an hour later (after the grout has had time to set a bit), with most of the excess cleaned off.

The wind and rain last week removed most of the blossom from the cherry tree, but now the apple tree in the back yard is putting on a show. 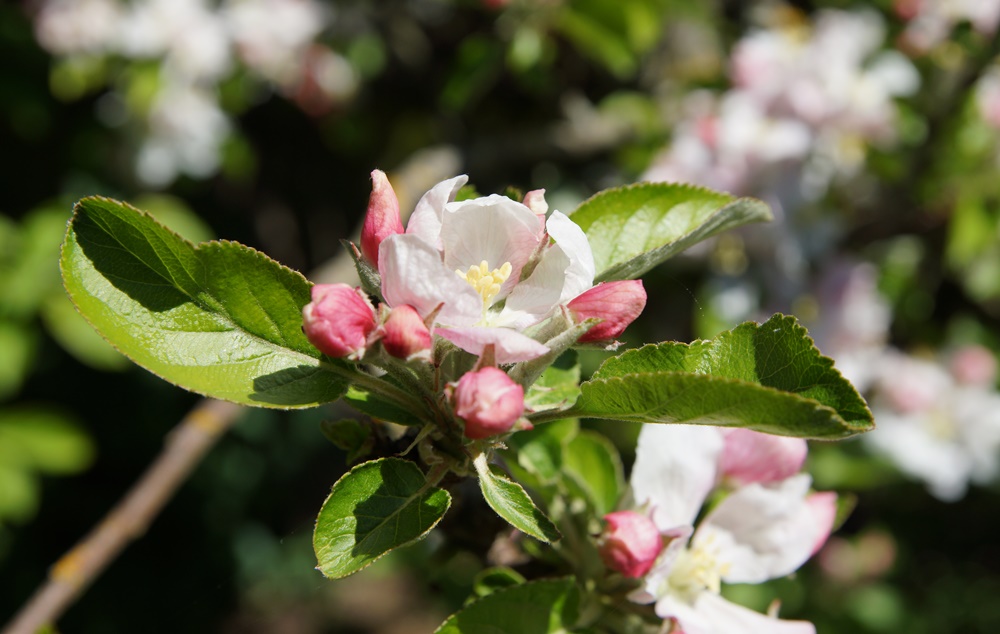 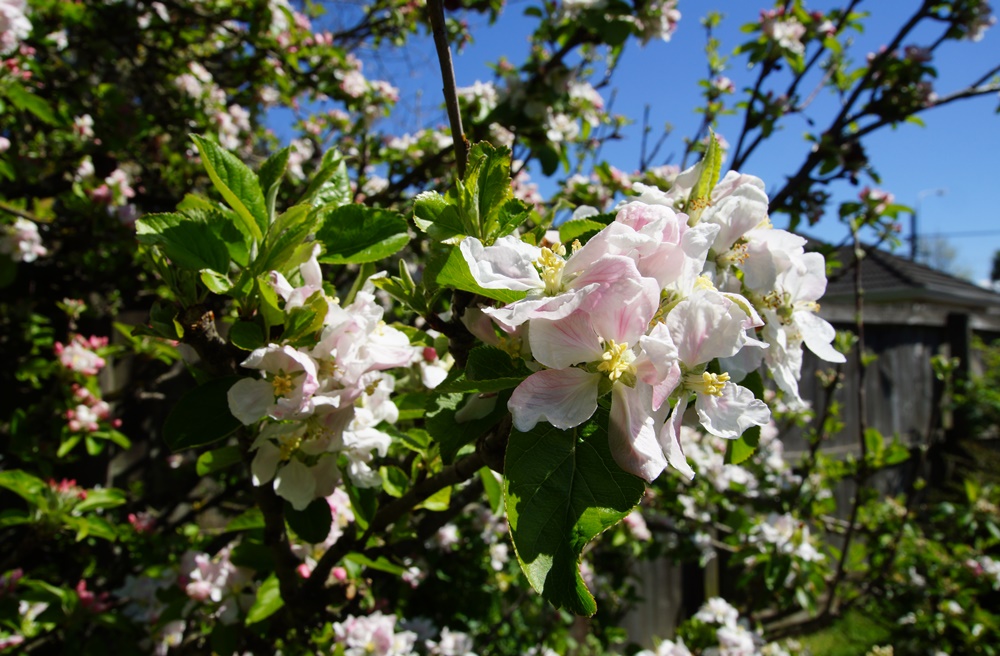 As always, I forgot to prune it over the winter, so chances are very few of those flowers will end up as actual apples (and of those that do, most will be eaten by birds or coddling moth before I get to them anyway), but I might get enough for a batch of chutney, at least.

arvestbird, the miniest mini-Harvestbird and I had planned to go to Dorothy’s this afternoon for tea and scones and cucumber sandwiches, but alas when we got to Cranmer Square there was no sign of the little green caravan.  So we went to the Coffee House instead, in anticipation of cake.  Unfortunately, in their reinvention they’ve obviously neglected the cafe side of the business in favour of the restaurant, because the food, normally good, was totally disappointing – the cheese scones were boring (and it’s very very hard to make a cheese scone boring!), and the slices were uninspired.  A pity, because that had been one of our go-to places for emergency cake, but it looks like yet another place to strike off the list 🙁

However, not all was lost of the day – we did get to go for a walk over to the new Gapfiller installation, a mosaic chair and ottoman (titled Flora and Otto respectively) created by Crack’d for Christchurch out of crockery broken in the earthquakes.  Totally gorgeous work, with so many amazing little details. 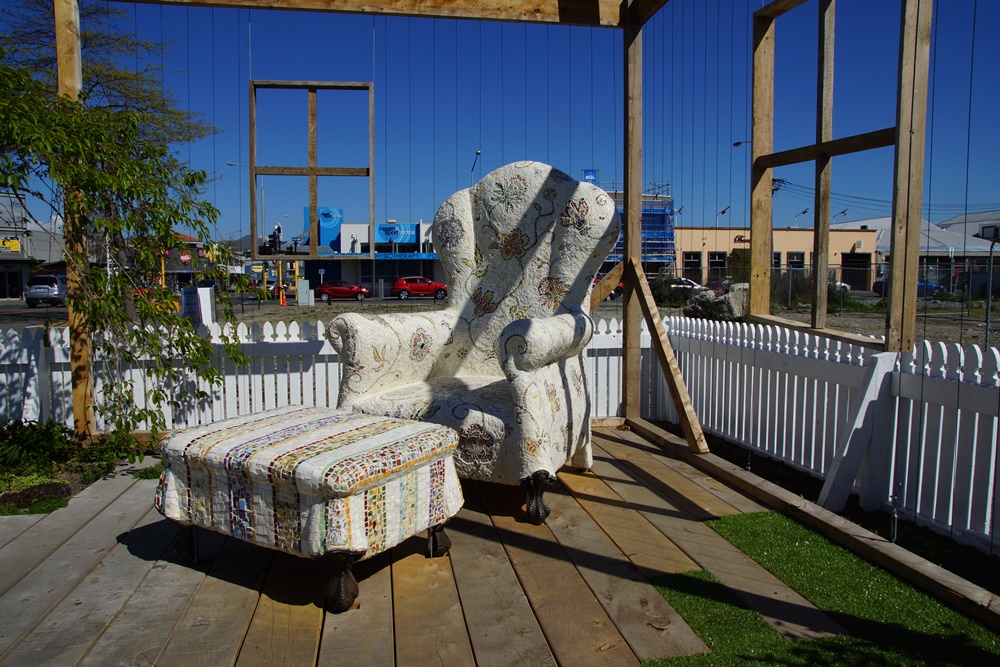 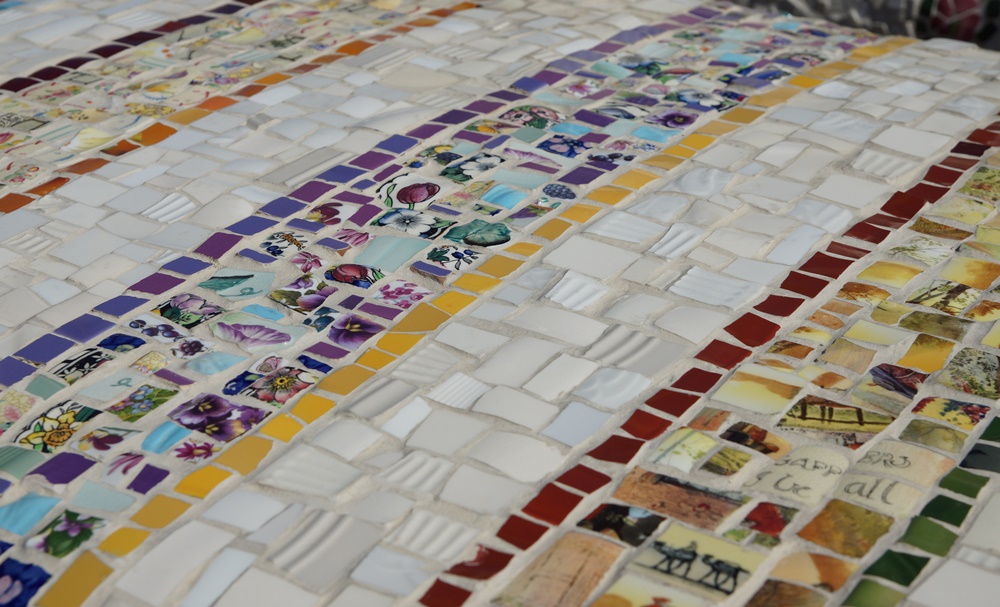 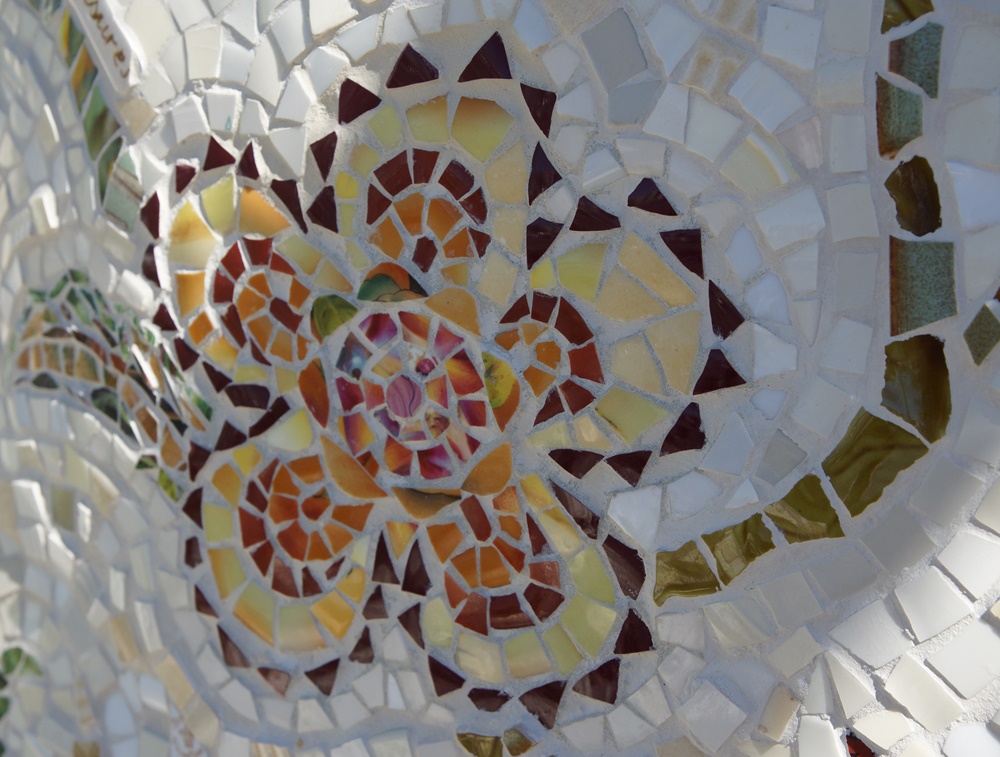 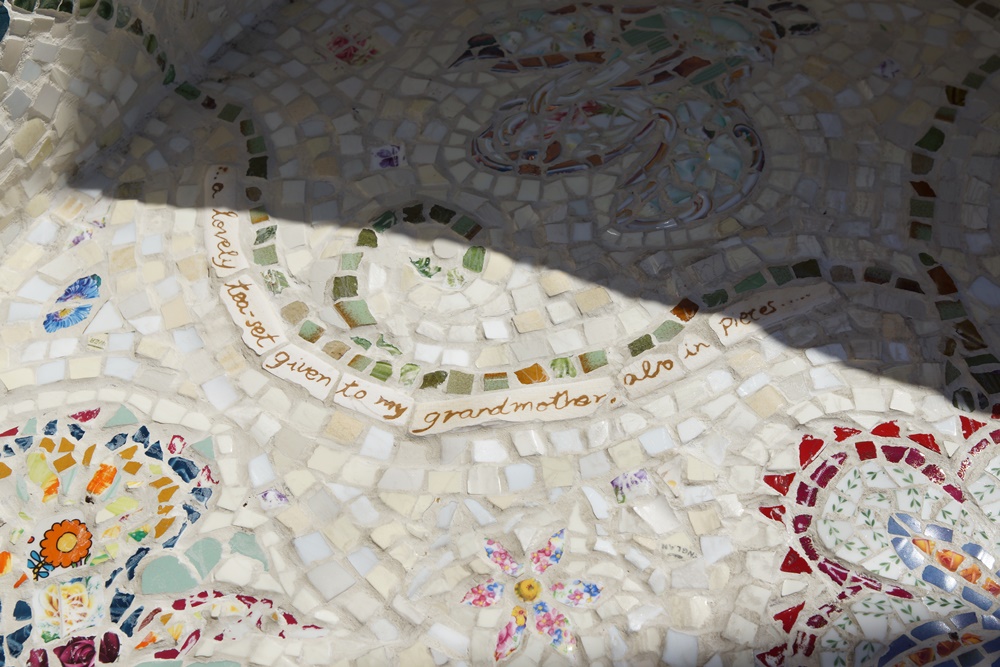 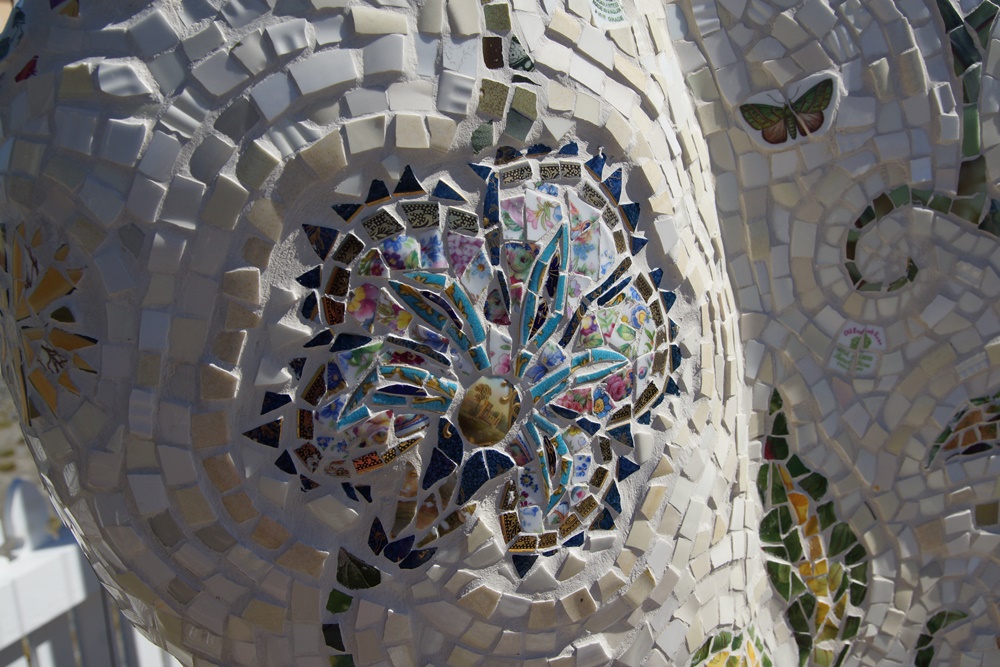 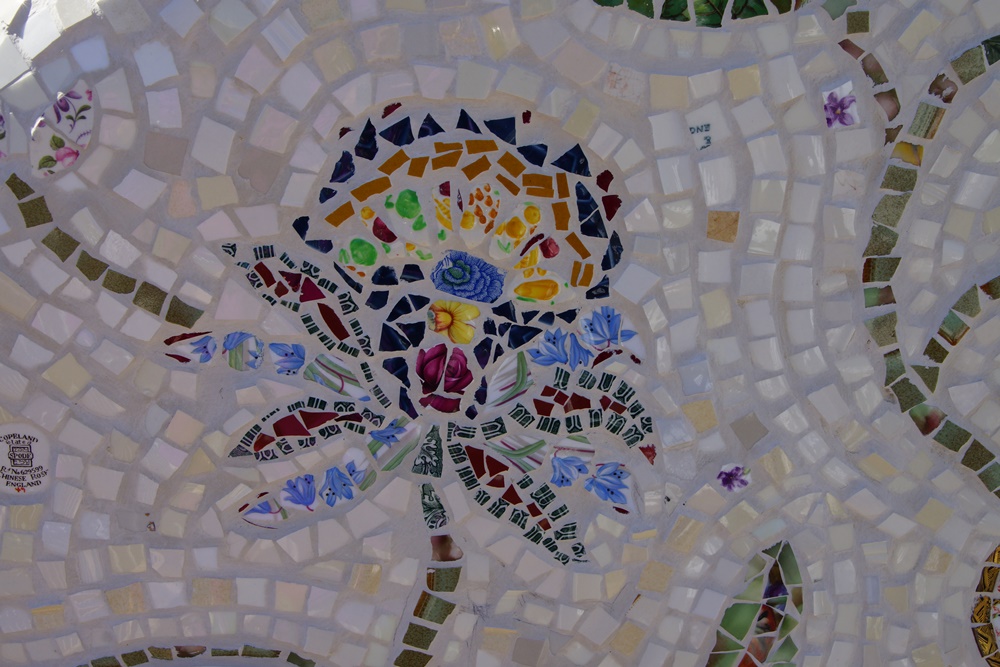 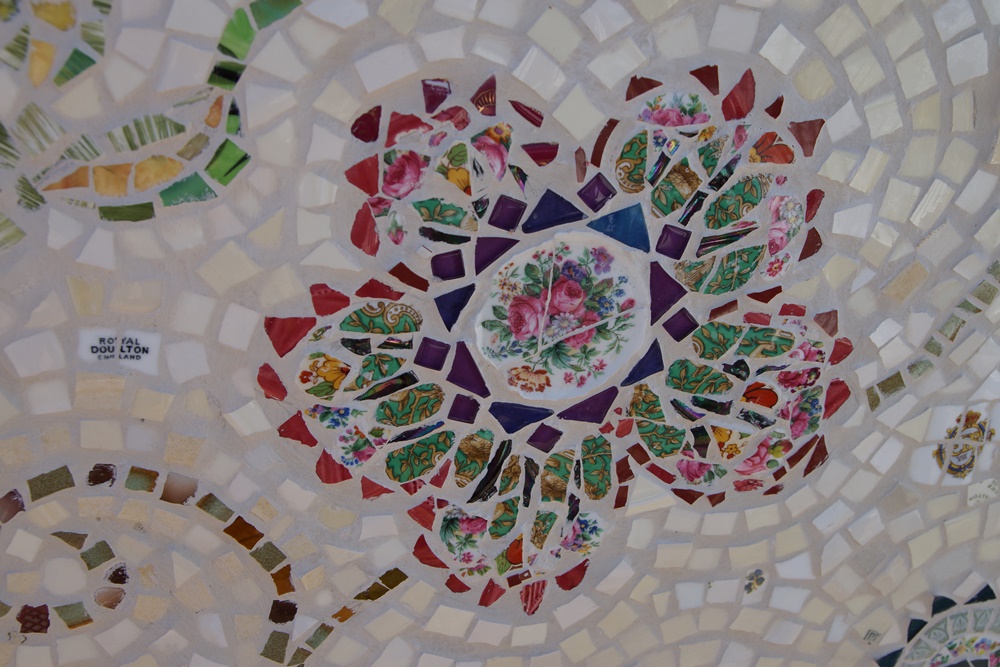 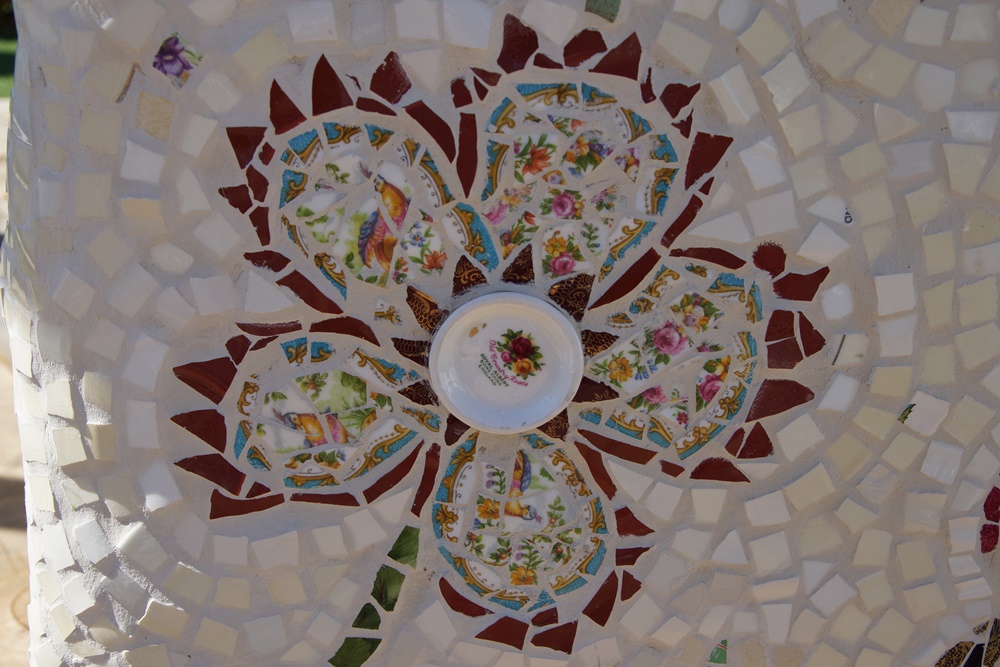 idn’t get round to grouting the mosaic today after all – when I read the instructions properly and saw the bit about having to clean the tiles 12 hours after you grout them, I decided to leave it until next weekend when I could actually manage that without having to get up early tomorrow morning to do it.  I don’t know if it has to be exactly 12 hours, or if it would be a bad thing to leave it more than 12 hours before cleaning them, but it seems safer to actually follow the instructions.

Anyway, I spent most of the afternoon baking, and baking and grouting probably wouldn’t have gone together particularly well 🙂  The baking is for morning tea tomorrow – it’s the birthday of one of the team on Tuesday, but we’re all going to be out at a training course all day, so we decided we’d surprise her with morning tea tomorrow instead.  So I said I’d make the birthday cake: chocolate fudge cake, of course.

or a change, this weekend arrived with nothing written into my diary.  It actually left me feeling slightly at a loss this morning – I seem to have had something planned every weekend for months, so not having to work around being at some particular place at some particular time felt weird.  But I quickly brushed off the weirdness and went for a walk over to Hands, to get some more tiles to finish off my mosaic (luckily they had one packet left of that particular colour!), and some grout for when I get to that stage.  I stopped off at a nearby cafe for a late breakfast before walking home again,  It was at a new to me place (though I think it’s been there for a few years), that I don’t think I’ll frequent again – the food was ok (though not fantastic), but seriously overpriced, and the service was really rough.  Perhaps it should have been a clue that the place was half empty at 10 am on a sunny Saturday, when most cafes are packed with brunchers.

I had great intentions of getting all sorts of stuff done when I got home, but there was a sunny spot and a cat, so… yeah, not much achieved with the rest of the day (but if you’re going to not achieve anything, a cat and a sunny spot is the pleasantest way to do so!).  I did manage to stick the last few tiles round the edge of my mosaic though, so once it’s had 24 hours for the cement to cure, it’ll be all ready for grouting (though that might not happen until next weekend – depends how inspired I feel tomorrow afternoon).

Lytteltonwitch asked if my mosaic was going to be a cat. No, just a random swirly pattern, but if you squint your eyes the right way it might be a cat’s tail… 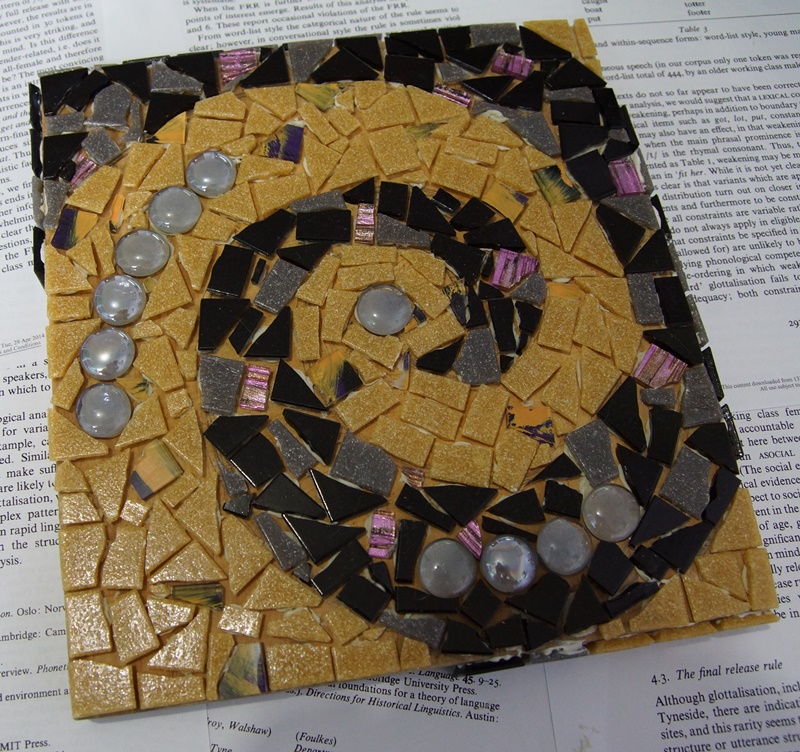 It may look complete, but actually I didn’t have enough of the yellow tiles to finish the sides:

Plus of course it still needs to be grouted. Both will have to wait until next weekend when I can get to Hands to buy more tiles and the grout. I’m pretty pleased with how it’s looking so far, though.

The Gwilks came round for dinner last night, followed by a few games (of course!).  They’ve just acquired a new cat, an SPCA rescue.  I popped round to visit her today (and to borrow MrsGwilk’s tile cutters), and she’s gorgeous – a little grey shorthair that’s probably got a touch of Russian Blue in her ancestry.  Very friendly too – they only got her yesterday, but she seems to have settled right in, and was sitting comfortably on mini-Gwilk’s bed and accepting tickles from all visitors.  She’s tiny though – she’s 18 months old, but looks about the size Pushkin and Parsnips were at half that age.

The cherry tree survived the hail, and is now in full glorious bloom. 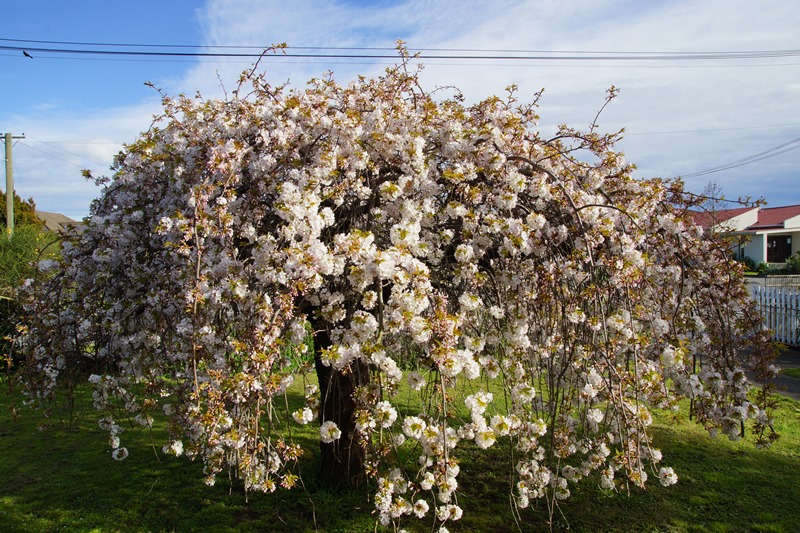 As promised, photo of the work in progress: 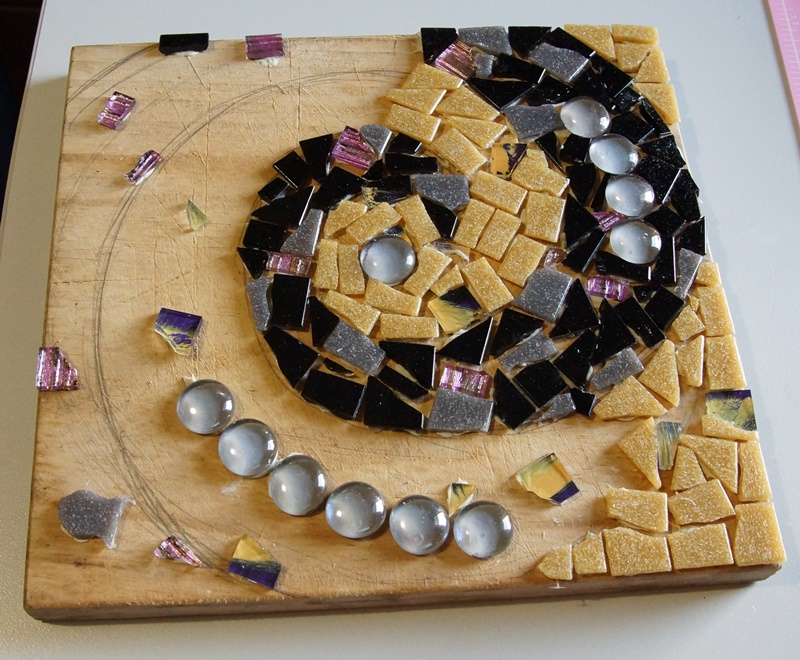 Gotta go now, need to get to the airport (flying up to Wellington for the day always seems like such a good idea – after all it’s just a 40 minute flight, hardly any time at all.  Until you add on check-in time, and getting to and from the airport at each end, and everything else, and you find yourself having to be up at 5 am…)

ou know how I keep saying I have too many hobbies? And that I really really don’t need any more, especially of the crafty variety that involve a large investment in tools and material (not to mention time)?  And that I’m really really really going to stick to just quilting and cross-stitch and lace making (oh yeah, and decoupage, and there’s a bag of knitting sitting in the cupboard, but that’s it, honestly (the odd bit of card making/papercraft when I’m at Mum’s place doesn’t count, because that’s her hobby, I just have a play sometimes)).  Yeah, I failed again.  It’s really not my fault though, it’s MrsGwilk’s.

See, what happened was that a couple of months ago the Gwilks were at my place and MrsGwilk was admiring my coffee table with the fabric decoupage fake mosaic.  And she mentioned how she’s always wanted to learn to do mosaic, and suggested that we go to a class together sometime.  So last night we did – we spent the evening at Hands learning to cut tiles (actually, “cut” implies way too much accuracy – “break in vaguely the direction you want and hope for the best” is a lot closer to reality) and break crockery, and all about glues and grout and other exciting stuff, and made a start on our own projects.  Actually, MrsGwilk, being sensible enough to choose a small project and use large chunks of crockery for it, pretty much finished hers – she just needed to wait 24 hours for the glue to cure, and then she’d be able to grout it.  I, on the other hand, being my usual over-ambitious self, came up with a large(ish) and complicated design which necessitated many many many very small pieces of tile, so only got about a third of the way through all the breaking and gluing before it was time to go home.  So yet another project needing a weekend devoted to finishing.

At least I haven’t actually invested in any tools yet.  MrsGwilk has a set of tilecutters she acquired ages ago as part of a box of random tools, and she’s promised I can borrow them whenever I want, so I can continue to pretend to myself that I’m just dabbling, and really haven’t acquired yet another hobby.

Photos of the work in progress will follow if I manage to get home tonight while it’s still light enough to take them.