Back working on my models again.  I thought I’d be almost finished by now, but last week I discovered I’d missed a couple of crucial steps from the process, so I pretty much had to start from scratch again (not quite, because a lot of the work I’d done before will be useful, but still feels like I’ve wasted a couple of weeks’ work 🙁 ).

Well, it’s been an … interesting… couple of weeks since I last posted.  First there was the American elections.  We were watching the results come in in our office (it was early afternoon here), and, like the rest of the world, couldn’t quite believe what we were seeing as the map turned redder and redder.*  The mood was pretty sombre by the end of the day (especially for Rosalee, who does a lot of environmental work outside her paid work, especially around climate change, and I think was feeling like it was all for naught).

And of course, if we’re feeling unhappy about the election here, I can’t imagine how my American friends are feeling (or rather, I can – I’ve seen such an outpouring of grief, and fear, and anger from various corners of the internet that I occasionally inhabit).

*The whole red=right wing, blue=left always throws me when I watch American elections.  Here (and in the UK, and most other places I know anything about the politics of), red = left, blue = right.  So I always get excited when I see a state go red, then have to remind myself that it’s all back to front, and red is actually bad news.

The next horrible and unexpected event was last Monday’s earthquake.  It didn’t feel that strong in Christchurch, but it was enough to wake me up, and it went on for ages (I think they said it was about 2 minutes, which is a VERY long time – the September 2010 earthquake was only about 50 seconds, and that one felt like forever).  Even though the shaking didn’t feel that violent, it was a big rolling motion that was enough to get all the doors in my house swinging open and closed, and it definitely got the adrenaline going – it took me a few hours to get back to sleep (the quake struck just after midnight).

Getting back to sleep wasn’t helped by spending the first hour or so obsessively checking Geonet and various news websites to find out what had happened.  My initial worry was that it had been centred in Wellington (I could tell from the length and strength of the shaking that it had been big but not close to Christchurch, so Wellington was the obvious conclusion).  Thankfully it wasn’t, or the death toll would have been many hundreds instead of 2, but the news still isn’t good – Kaikoura and several other small towns in North Canterbury and Marlborough have pretty much been destroyed, and the main transport route between North and South Islands is gone, which we’ll be feeling the effects of for many months.  And although it wasn’t centred on Wellington, the direction the earthquake travelled means they took quite a hit from it, and there’s been quite a bit of damage to their CBD.

In happier news, Christian (of Jenny and Christian) is in town for a conference, so is staying with me.  It’s been great catching up with him, although I wish Jenny had been able to come over too (actually, she is in New Zealand at the moment too, but at a different conference up in Hamilton).  It reminds me of how much I miss their friendship – I really must find the time (and the money) to go over to Brisbane and visit them sometime! Maybe once I’ve got this thesis out of the way… 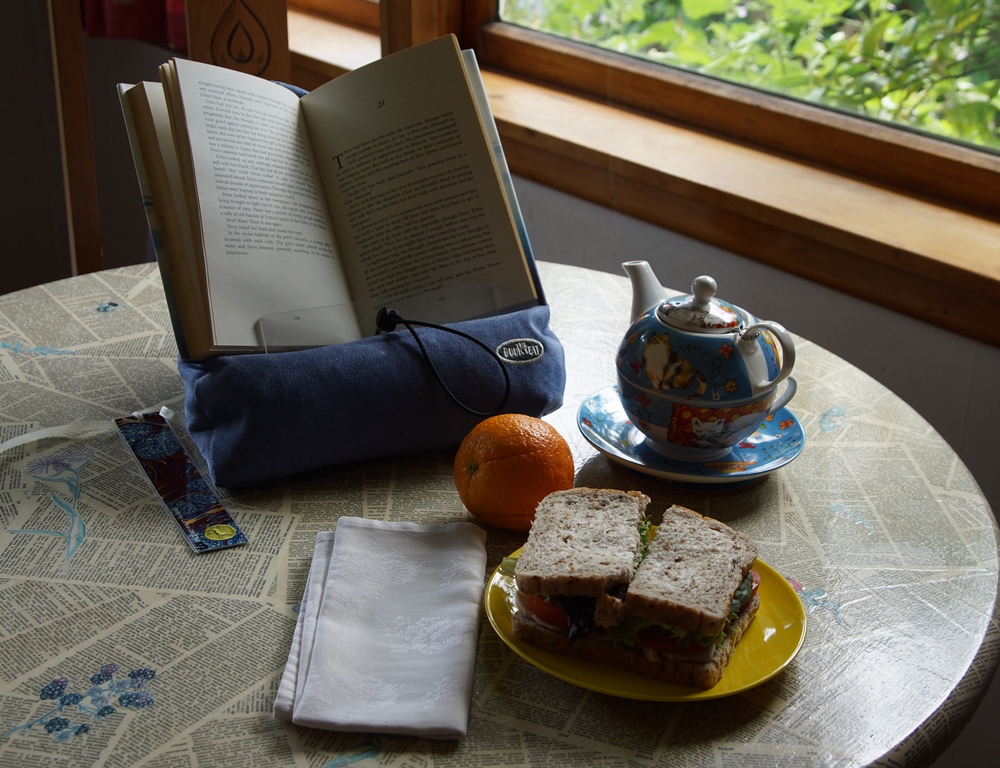 1. Housework done, a casserole simmering away that will provide quick and easy meals when I’m working late this week, the sun is still shining despite the threat of rain, and enough time to sit and eat lunch with a book.

2. The closest I’ll ever get to gardening. One of the supermarket chains was doing a promotion where they gave you a seed kit every time you spent a certain amount (a huge improvement over the previous version which involved plastic toys), and so far I haven’t managed to kill any of them (which is more impressive than it sounds, if you don’t know my long history of killing potplants). So I have lettuces and radishes and spring onions and a fennel growing on my windowsill (plus, just out of shot, a couple of very baby basil plants, who I don’t think it’s anywhere near warm or sunny enough for yet, but they’re struggling along nonetheless). 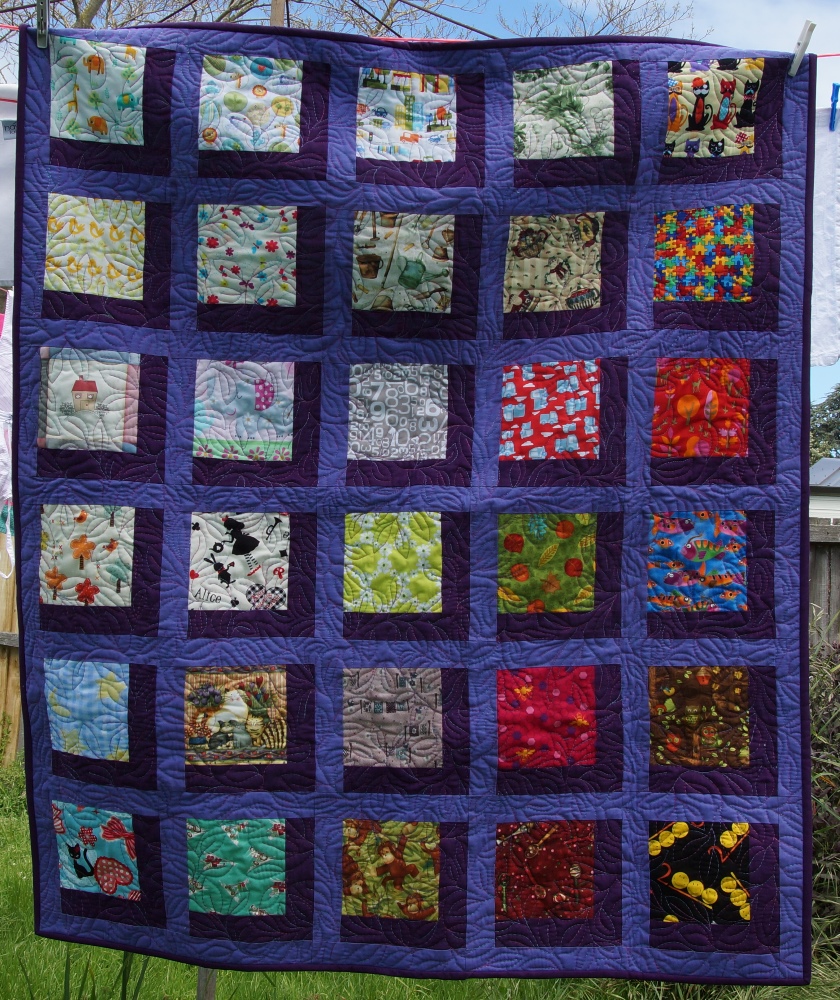 3. I finished the quilt for my supervisor’s baby, and (despite sewing machine problems in the middle of it, and running out of the cool variegated thread so I had to finish it off with a slightly different colour, and that my quilting is still pretty haphazard) I think it turned out pretty well. As long as you don’t look too closely…

Actually, there’s some bits I like even when I do look closely: 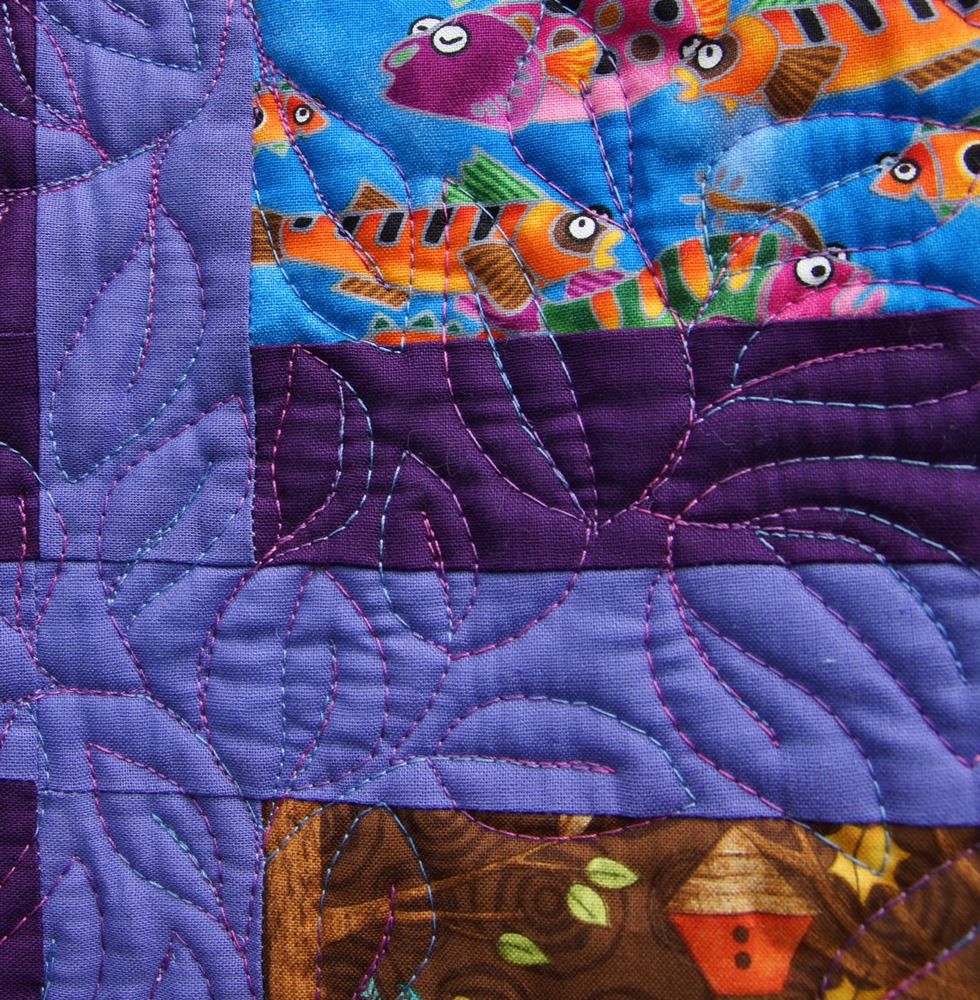 It’s a long way from perfect, but I can see I’m improving, and that’ll do for now 🙂

I am deep in the throes of data modelling, trying to find a statistical model that adequately describes my data so that I can produce some results to write about in my thesis.  In practical terms, what this means is feeding the computer my data plus a long equation that contains all of the factors that I think affect the genitive (and the ways they might interact with each other), then waiting (im)patiently for a few minutes while it whirrs away to itself and either spits out a bunch of numbers, or a nasty red error message telling me the model has broken (which basically says the calculations have got too big for the computer to cope with, so it just gave up).  Sometimes when the model breaks, just rearranging a few terms in the equation (while keeping it mathematically equivalent) is enough to fool the computer into trying a bit harder, but it’s a bit of a guessing game as to which terms to swap around, so it can take a lot of tries before I get a model that doesn’t break.

Then, once I get a model that runs properly, I note down its particular bunch of numbers, one of which is a score which tells me how good the model is at describing my data.  Then I start again with a new model with a different combination of factors and interactions, and compare its score with the previous model’s, to decide which model is better, and so on until I find the best possible model.  None of the models will ever be perfect (because it’s just a model), but in theory, if you search long enough, and try every possible combination, then you can find the one that’s going to get closest to properly describing your data.  (And once I find that, I can use all the other numbers it spits out to make pretty graphs and hopefully prove something interesting!)

But that takes a long time (see taking several minutes to run each model, plus often having to try each model several times before it works – in the last hour, I’ve managed to test 5 potential models).  And there are hundreds of potential combinations.  Of course, there are ways of narrowing down some of the possible combinations, but it still means a lot of sitting around twiddling my thumbs while I wait to see if it’ll work this time.  And I’ve got to keep one eye on the window the model is running in so I know if it’s finished (or broken again), so I can’t do much constructive work while I’m waiting.  So as an experiment, I thought I’d try writing a post here while I wait (so if this seems a bit disjointed, now you know why – every few sentences I have to go back to my modelling, then try and pick up my train of thought here while my next model runs).

Not that I’ve got a lot to write about here – life is its usual round of work, study, work, study, try and find time to eat and sleep, work and study some more.  Talking of which, it’s getting late – I should go and find something for dinner.