We’re about to have a guest speaker, and I’m not sure whether they’ll be speaking in English or Greek, so this seems like a good opportunity to catch up a bit.

So, after Zeus’s temple we wanted to try and find the Lykia where Aristotle taught.  It was quite a distance away, but we worked out the route on the map and set off confidently.  And of course, got it completely wrong, and ended up walking about a kilometre in the wrong direction before we realised.  (In my defence, the map showed a stadium, and we did pass a small stadium, so I thought we were on the right track.  But it turned out that the stadium on the map (which was just one of those cheap tourist ones you get for free at the airport) was actually meant to be the Olympic stadium, which is a wee bit bigger than the one we passed.  (Also in my defence, you try reading street signs written in Greek and matching them to a map that’s written in English and see how well you do!)).  Eventually though we figured it out and backtracked.  The detour wasn’t entirely a waste of time though, because we came across the site of an old temple (can’t remember now which god – they all start to blend into each other after a while – it might have been Artemis, I think?), and another little Byzantine church.  That’s one of the cool things about Athens – it’s never boring, because there’s interesting little spots scattered all over the city.

Anyway, we set off on the right road this time, which took us past the parliament buildings, guarded by the guys in skirts and pompoms.  We stopped to take some photos, and were about to move on when the two guards started thumping the butts of their rifles on the ground.  It turned on we were just in time for the start of the changing of the guard ceremony. 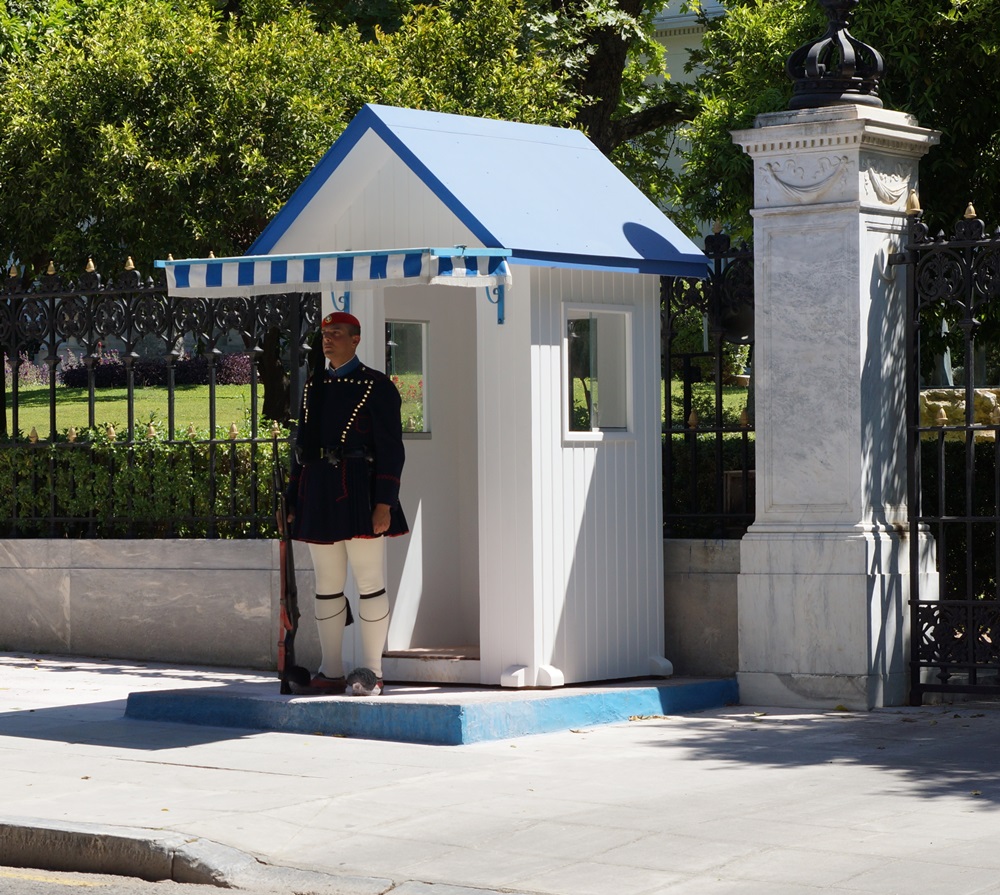 I’m sure it’s intended to be a very solemn and dignified ceremony, but I’m afraid we got the giggles.  They did this elaborate march towards each other (even weirder than the stomp shuffle of the flag soldiers up at the Acropolis), with a combination of high kicks and a movement that looked exactly like they were trying to scrape dog poo off their boots.  The combined effect was very much John Cleese doing his Ministry of Silly Walks routine, but with the added bonus of bouncing pompoms on their feet and knees, and skirts that were way too short to be doing high kicks in. 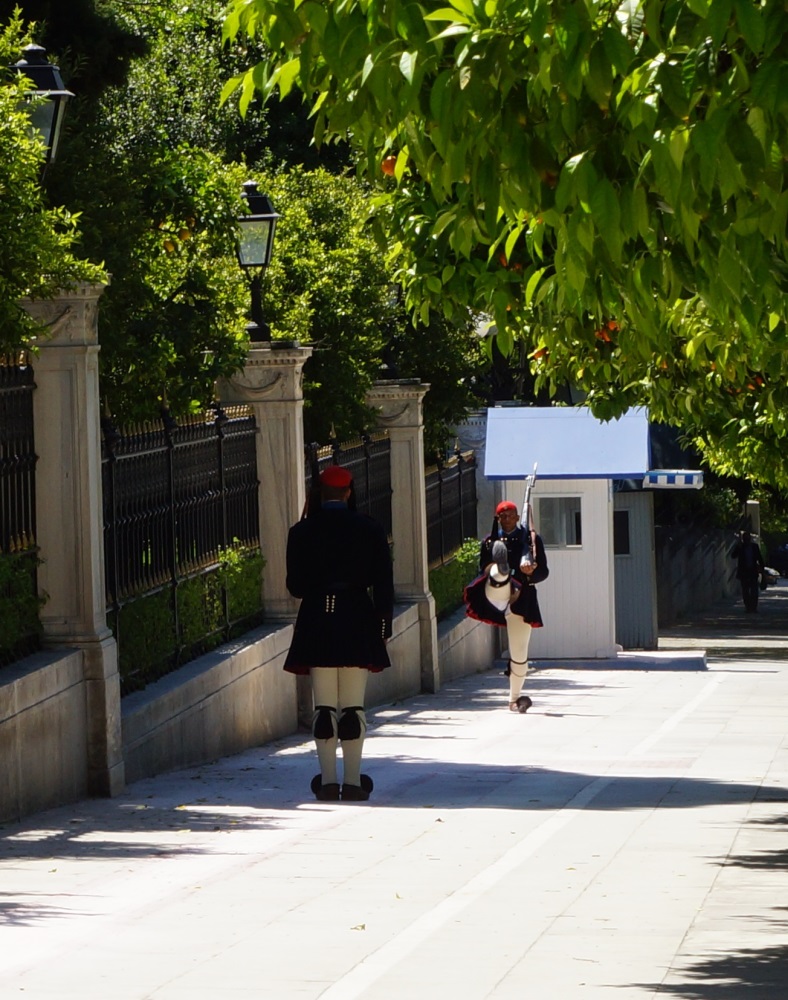 When the guards met in the middle there was the usual military pomp of presenting arms and being inspected (by a guy in normal camouflage style uniform), then they stood and waited while another three guards approached from across the road, all doing the Silly Walk.  Then everyone presented arms yet again, one of the new guys escorted the old shift back across the street again, the other two new guys were inspected, and they Silly Walked their way back to the guard posts.  Definitely worth stopping to watch the ceremony, even if only because we got such a laugh out of it (with no offence intended to the Greeks, of course – I’m sure you’d find just as much humour in some of our traditions!). 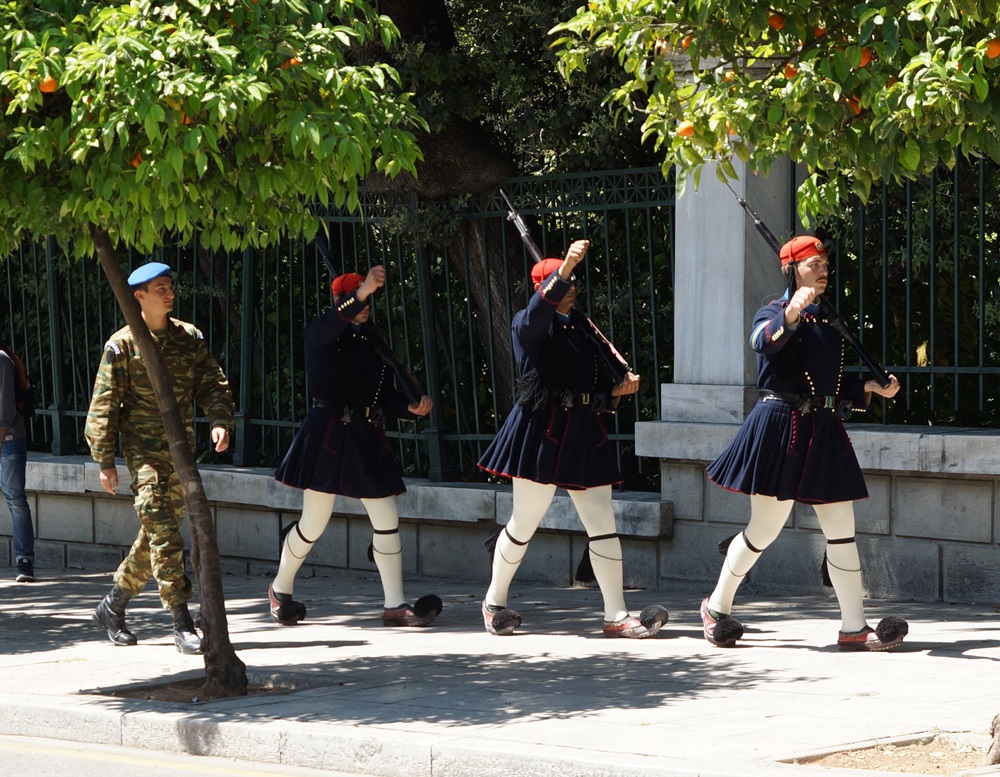 I feel like the guy in front isn’t as committed to the silly walk as the other two. 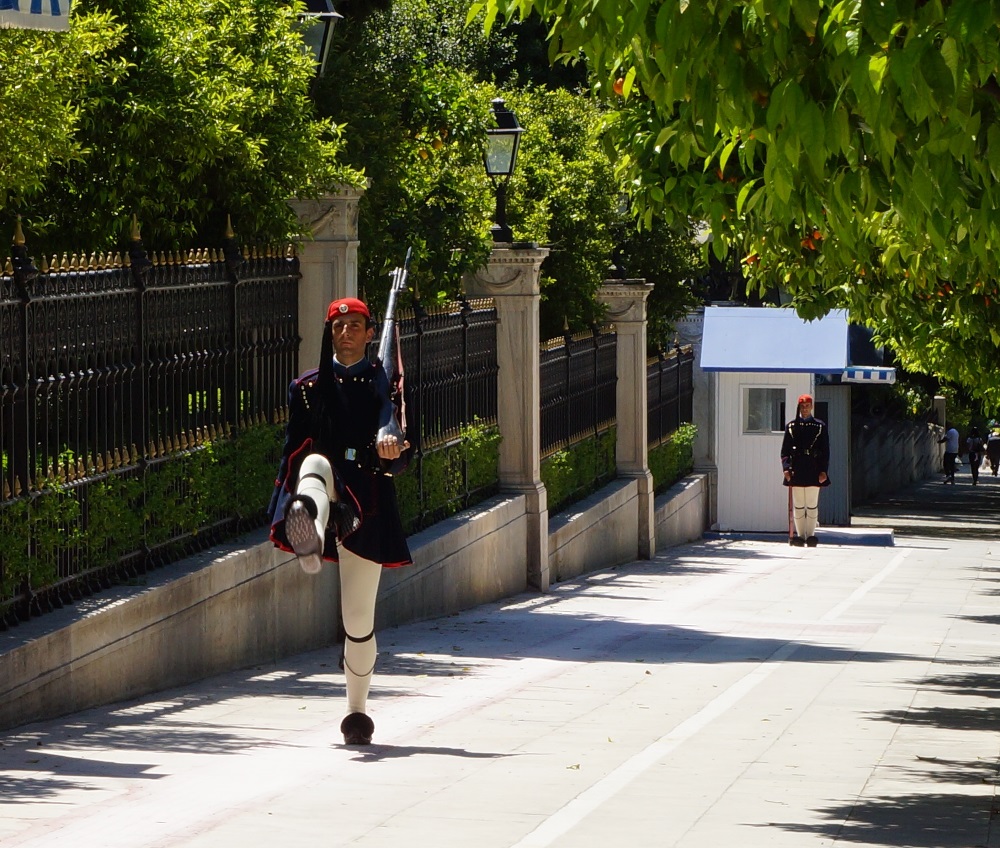 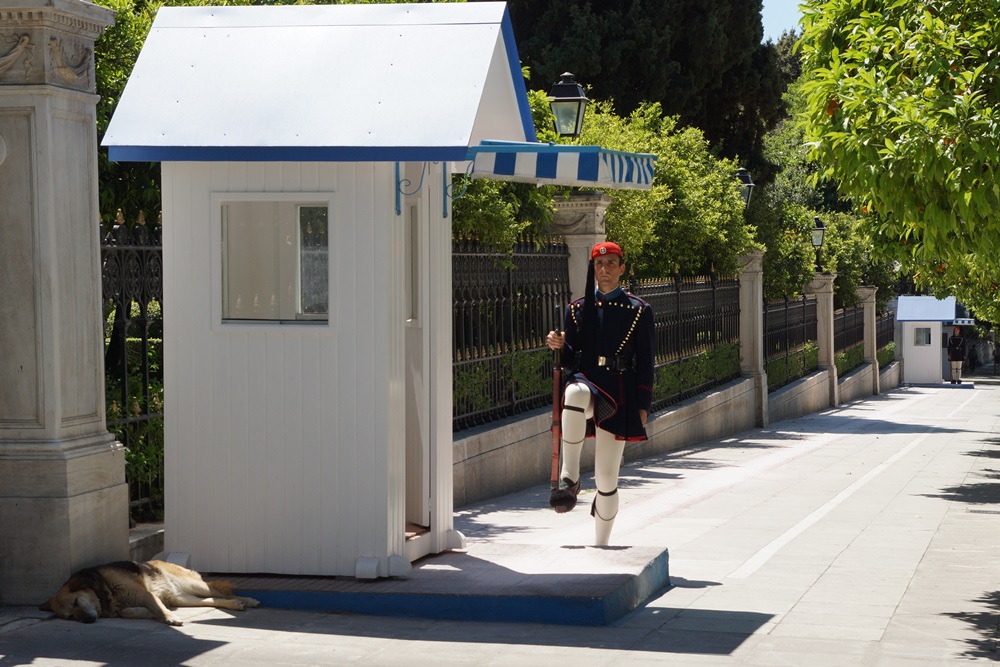 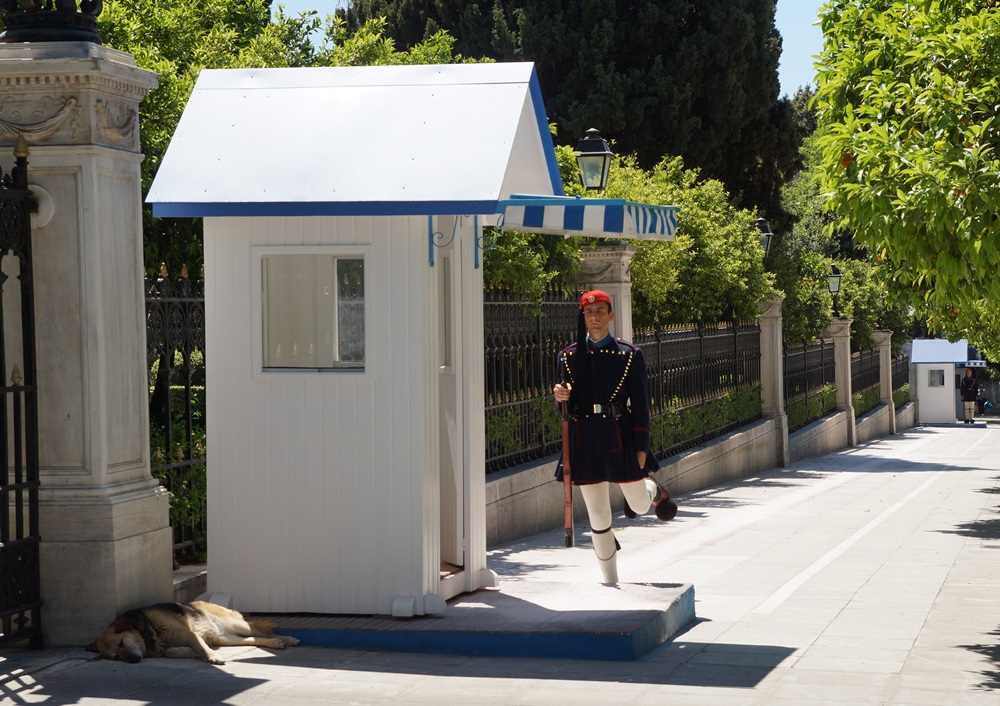 The dog is supremely indifferent to all the stomping and scraping going on behind him – he just wants a shady place to sleep.

We found Aristotle’s Lykia not far from the parliament buildings.  All that is left of it are the traces of a few walls, so not a lot to see, but it was still really interesting to imagine (helped by the descriptions on the information boards) the buildings that would have once stood there.  And anyway, just the thought that you’re standing where Aristotle once stood is so amazing!  There’s so many places like that in Athens, that make you realise that people whose names you only know as legends actually existed, and lived right here.  It makes them all seem so much more real.  Like on Friday, when Katherine took us past an otherwise unremarkable wee square, and mentioned that that’s where Diogenes had his home (according to legend, in a large pot). 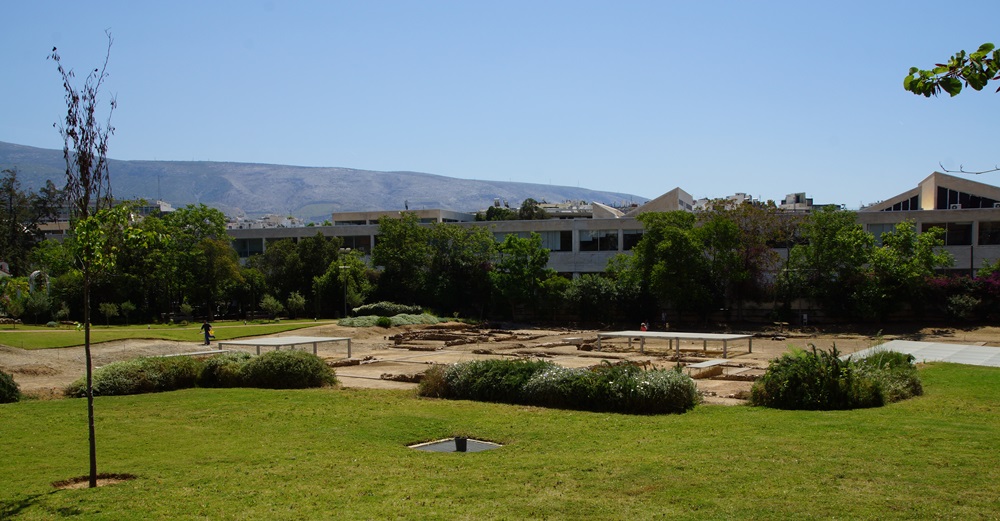 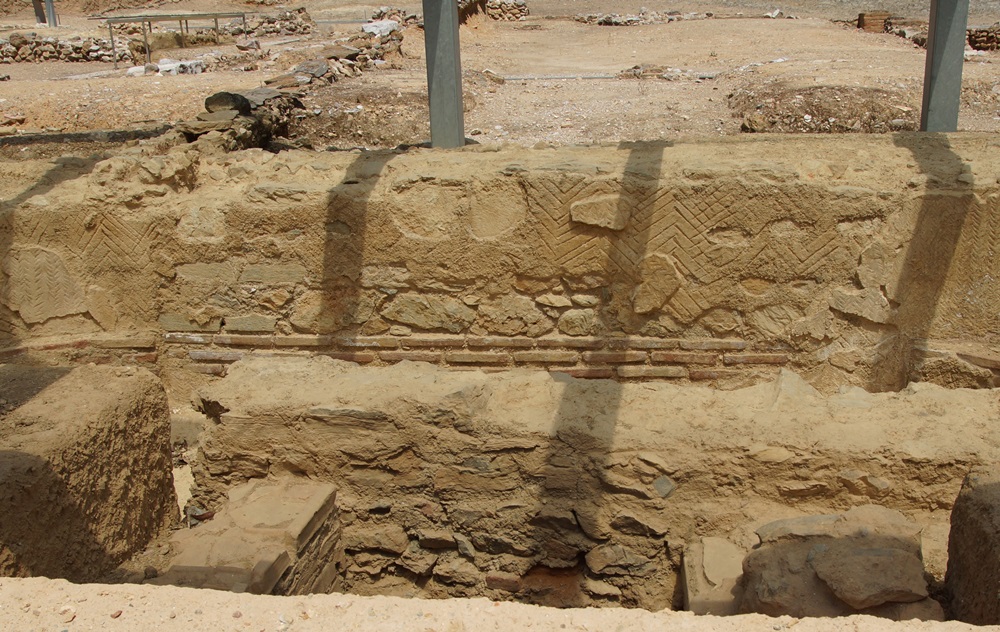 The site was surrounded by gardens, and a gardener was working on them as we walked around, but otherwise we had the place pretty much to ourselves. I suppose it’s not as spectacular as the big name tourist sites, hence the lack of crowds.  I don’t mind, it was to our advantage to have the place to ourselves, because we could take our time looking around.  As we were leaving, the gardener came over and presented us with a rose each from the bush he was pruning – I got the impression he was pleased to see visitors actually interested in the site. 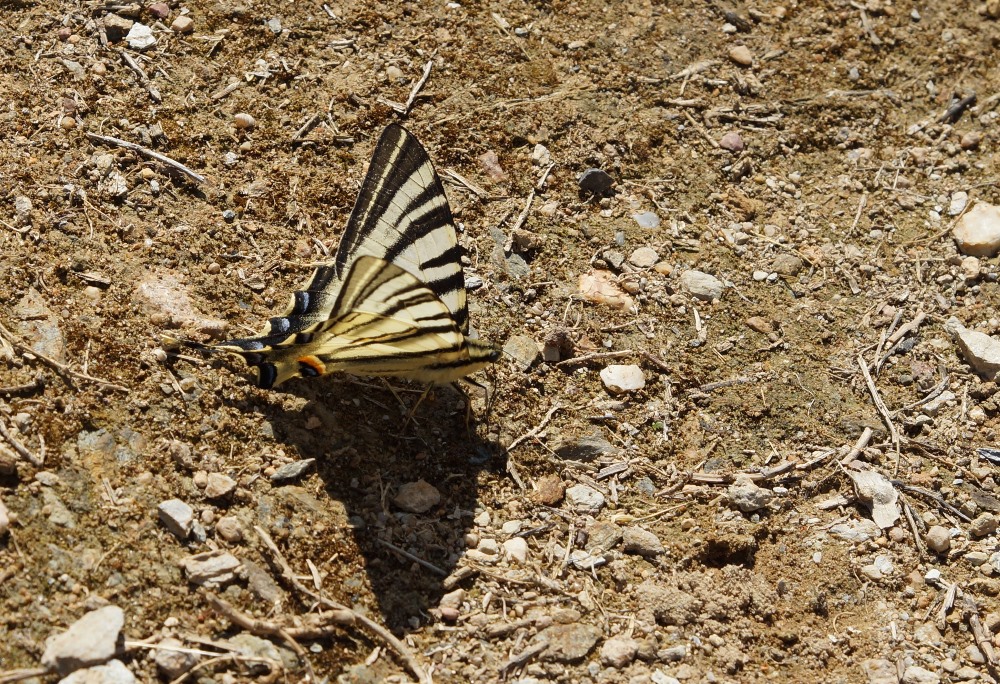 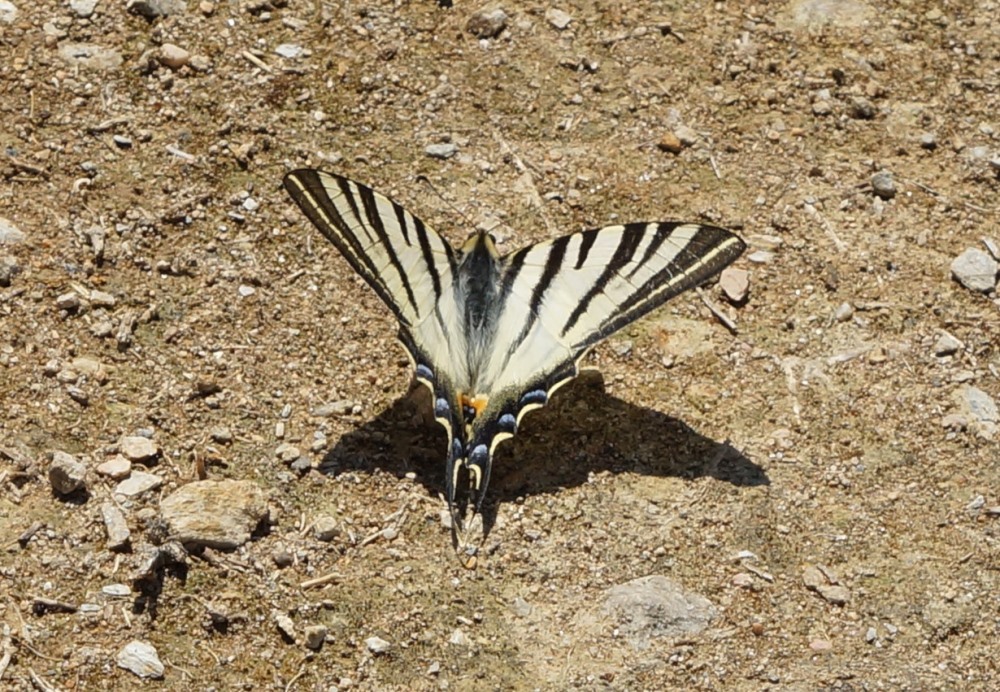 We walked back to the Plaka area, which is very touristy – pretty much every shop that isn’t a cafe is selling souvenirs.  Amongst it all we found a little shop selling prints and watercolours.  I stopped to have a look and found a nice little pen sketch of an Athens street.  When I went to pay for it (only €15 – did I mention how cheap everything is here?) I realised that the shopkeeper was actually the artist.  So that was cool, to not only have another picture for my wall of art, but also to have bought it direct from the artist.

While we were in Plaka, I thought I might as well take advantage of the cheap prices to buy a few wee presents for the kids.  So I got Nephew #1 a t-shirt with the Pythagorean Theorem on it (written in Greek, of course), and Nephew #2 one that says “This is Sparta!”  And for Niece, a bag with cats on it (ok, so I may have ended up buying one of those for myself as well… 🙂 ).  Hopefully they should appreciate them.

By that time, we were starting to feel walked out (Lytteltonwitch calculated we’d walked about 21 km in total that day), so we headed back to the apartment to sit down for a while and get organised for the official start of the convention in the evening.

The convention venue is just around the corner from our apartment, in a little museum.  The evening was the usual business of registration, browsing (and contributing to) the book buffet, raffle tickets and supply store, and of course, lots of catching up with friends I hadn’t seen since Melbourne (or even Dublin!).

So much for keeping this journal up to date, but the last few days have been so packed, I just haven’t had time.  So, where was I up to?  Friday night at the convention, I think?

The highlight of the evening (other than seeing so many old friends, and meeting new ones) was a shadow puppet show.  Shadow puppets are a traditional Greek art form, with (I gather) a few regular characters that show up in every story and behave in predictable ways (a bit like Punch in the English tradition).  The one we watched was written specifically for the convention, and was all about one of the regular characters, Karagiozis, learning about Bookcrossing, and being carried by an owl to China to find out the fate of the books he’d released.  The plot involved a dragon and a monkey and was pretty incomprehensible even with the aid of the English surtitles (the play was performed in Greek, of course).  Despite not entirely understanding what was going on a lot of the time, it was still great fun to watch – the puppeteers were very talented, handling a dozen or so different puppets (actually, I think they said it was about 30 actual puppets, representing about a dozen characters – each character had multiple puppets, depending on what they needed it to be able to do), each with a unique voice. 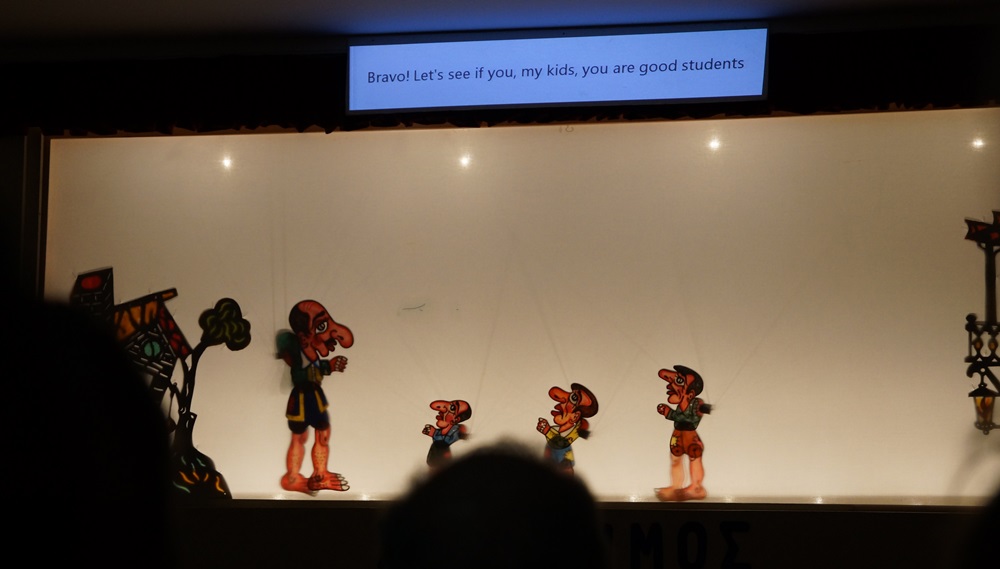 Sorry, not the best photos, because I was a few rows back so was trying to take pictures between the heads of people in front, while simultaneously trying not to block the view of the people behind me. But hopefully they’ll give you an idea at least of what the puppets were like. 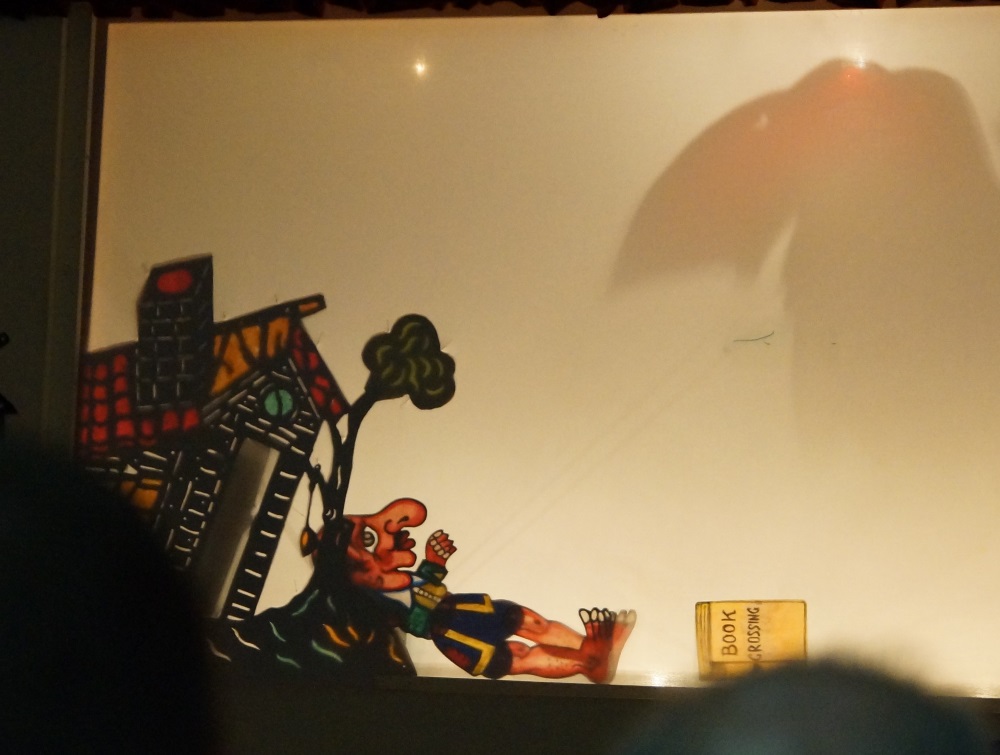 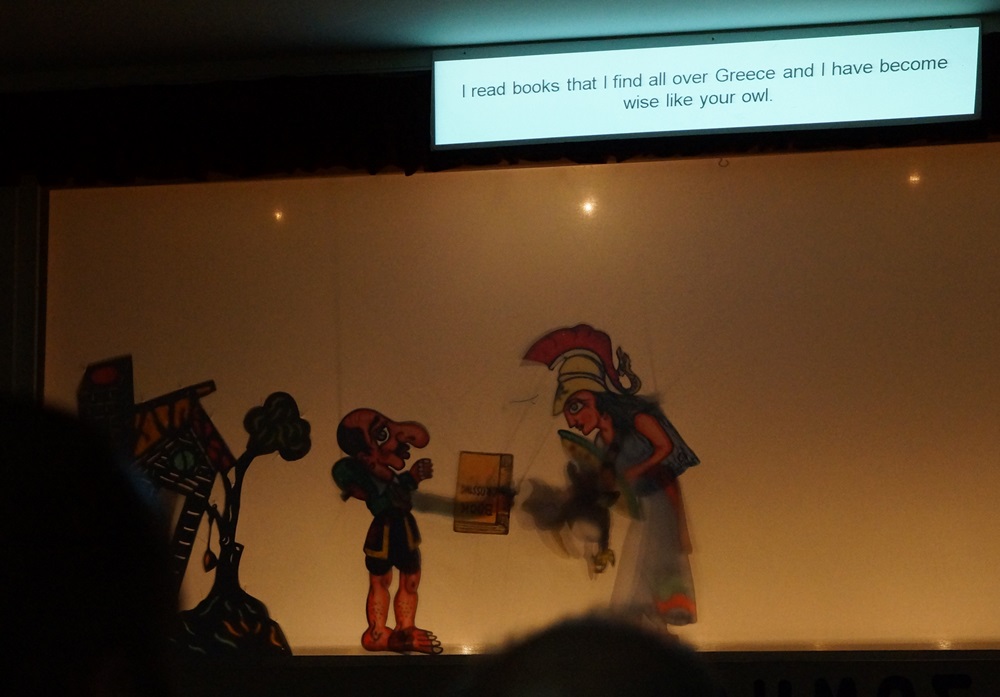 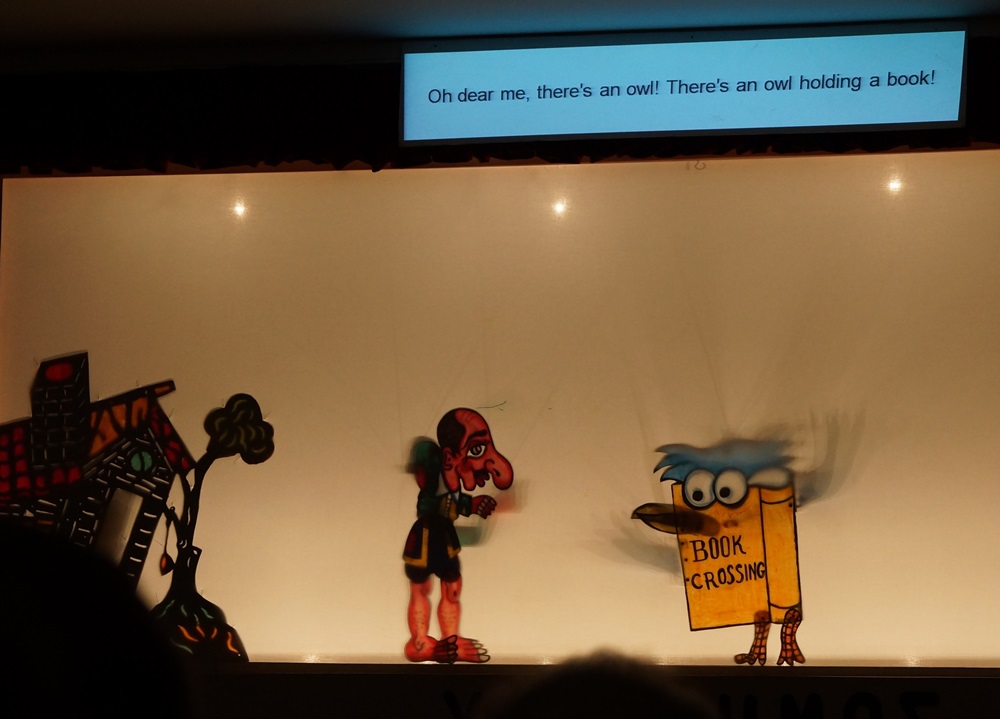 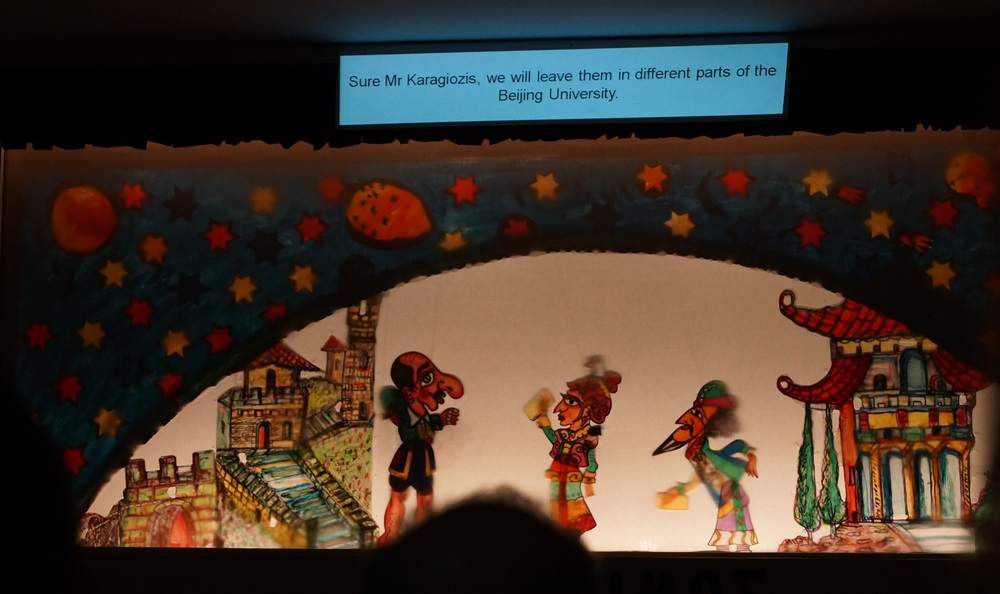 There was an author talk on Friday too, by an author who is also a translator.  He talked (in English) a bit about the challenges of translating, and of having his own books translated, which was really interesting.

And of course, being Greece, there was a tonne of food.  Each of the Greek bookcrossers had brought along a few dishes, and as almost all of them were traditional Greek dishes, I wanted to try as many as I could, so even though they were all just bite-sized snacks I was still feeling seriously full before I managed to work my way all the way down the table.  Among many other delicacies were the biggest olives I’ve ever seen (I’ve discovered that even though I don’t usually like olives, I do in Greece – they taste much nicer here! 🙂 ), and all sorts of little pastries and cheese balls that we got to know pretty well over the next few days (the snack table seemed to be being continually refilled).  There was only one dish I didn’t like: a sort of tasteless mush that apparently is traditionally eaten with dry bread leading up to Easter (which of course is later here than in the rest of the world – Orthodox Easter is next weekend) – I suppose it’s the equivalent to Lent (which I suppose makes sense that it doesn’t taste very nice – if it’s meant to be for Lent then you’re probably not supposed to enjoy it).

Saturday started with a yoga class on the balcony.  As expected, I was terrible at it – every time the instructor said “turn to the left”, I’d get confused and turn right (yay for dyslexia), and then get the giggles because I was facing my neighbour who’d turned the correct way.  Not really the most conducive to being calm and focussed.  Plus, having had so little sleep, I had to struggle not to just fall asleep when we did the meditation bits.  Yeah, I don’t think yoga is for me, really.  But it was interesting to try.

Next was another author talk.  The author (who spoke in Greek, but had a translator repeating everything in English), wrote children’s books, and mentioned how most of the schools in the distant islands don’t have libraries because of funding shortages, so it’s difficult to get books into the hands of children.  (As a result, the NZ and Australian bookcrossers have been talking to the Greek bookcrossers about whether we could sponsor a school to help buy them some books.  It looks like it might be a complicated process though, so I don’t know whether we’ll manage to do it.  We’re certainly going to try though – even a few hundred dollars would go a long way here.)