ost people spend Labour Weekend doing fun stuff, or at least relaxing a bit. I spent it working on my assignment, which is due on Friday.  But it was worth it, because I finished it!  All six thousand and something words (yeah, I may have gone a bit overboard there…)  I even got to spend at least part of today quite pleasantly, because I finished the final draft just before lunch, so I printed it out and headed to a nearby cafe that has a nice outdoor seating area, and spent a couple of hours sitting in the sun there while I proof-read everything and checked my quotes.  Then I zipped back to my office and made the final corrections, so all I need to do now is one more last-minute proof-read, and I’ll probably hand it in tomorrow, with plenty of time to spare before the deadline.

So that’s all the official assessment done for my paper, which theoretically means I can relax for the summer.  Except that we have to give a presentation to the Vanuatu community the weekend after next about the research we’ve been doing (it’s not an official part of the assessment, but it’s considered good form to give feedback to a community when you’ve been researching their language, so it’s part of our training to be good linguistic citizens), so I’ve got to try and work out how to convert all the technical complexities of my assignment into something that will make sense to non-linguists.  Oh, and my lecturer has invited me and one of the other students from the class to have coffee with a visiting academic

(I was just interrupted by a loud crunching noise from outside, which when I went out to investigate turned out to be one of our local boy racers crashing into a tree on the other side of the street.  He’s ok (but looking rather sheepish, and his car is a mess), and a few of the neighbours are looking after him, so I’ve left them to it.  At this rate, there’ll be no trees left on this street…)

Anyway, as I was saying, we’re meeting with a visiting academic tomorrow.  She’s an expert on the semantics of Pacific languages, and as Clare (the other student) and I both did our projects on semantic topics, apparently she’s really interested to hear what we discovered.  Which is exciting, but also a little bit intimidating – I know very little about semantics (despite just writing 6,000 words on the topic!), so I’m scared she’ll either tell me I got it all wrong, or that the interesting discoveries I think I’ve made are actually really obvious and boring.

Plus, the lecturer mentioned that she’s really keen for us all to write up our projects into proper articles and submit them to an academic journal, because so little has been written about Bislama that anything we can add to the literature will be important. (Which is another equally exciting and intimidating prospect!)  So there’s that to start work on too.

And of course I really need to make a start on some reading for my Masters, because I haven’t got a topic yet, and I start in January.

But other than that, I’m finished with study for the year! 🙂

(PS. Ok, maybe I spoke too soon when I said the boy racer was ok, because there’s an ambulance out there now.  Hopefully they just called it as a precaution, though.)

Dad was in town yesterday, so I took advantage of having access to a vehicle to go round a few places over on Blenheim Road and investigate wood burners (as my one has been declared too old to live by the dreaded ECAN, so I need to replace it before next winter or face a fine).  All went well at the first place we visited – the guy there was really helpful and gave me lots of good advice, and I left with a stack of brochures and useful information.

At the second place we visited, the woman was equally helpful, and equally forthcoming with advice and brochures.  Except that she directed absolutely everything she said to Dad, not to me.  Even though I was the one who’d approached her and said that I was looking for a log burner, and even though Dad was hanging back letting me do all the talking, she still kept talking to him and ignoring me.  Every time I asked her a question, she’d turn to Dad and tell him the answer!  The single time she directed a comment to me was when she demonstrated a feature on one of the fires and said “We girls like this, because it makes lighting the fire so much easier.” GRRRR.  I’ve just been asking you intelligent questions about kilowatt outputs and clearance requirements, and you somehow think I can’t even figure out how light a fire???

So yeah, guess which company I’ll be buying my new log burner from?

There is a type of tiny quilt that is commonly called a “mug rug”.  Except, in my house apparently it would be more appropriately called a “cat mat”. 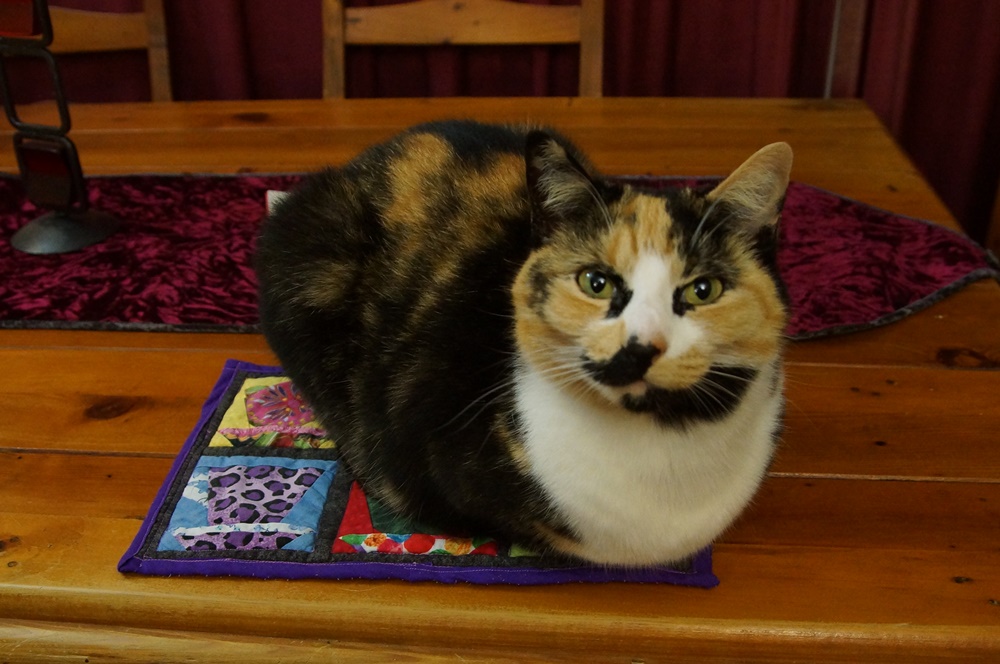 “What? It looked comfortable.”

I have decided that Parsnips follows a definite set of rules when deciding whether to sit on something: