espite appearances, I haven’t disappeared off the face of the earth.  I’ve just been kind of busy.  Semester started two weeks ago, and it was very much a case of straight in the deep end as far as workload goes.  I’m loving the course though – it’s much more hands-on than the last paper I took (which was all theory all the time).  This one is on linguistic field work – how you would investigate and describe a previously unknown language (which is something “proper” linguists spend a lot of time doing, because there are a LOT of languages out there that have only a few elderly speakers left, so the race is on to document them while we have a chance, both for the benefit of future generations in that culture who might want to revive their language, and because every language adds data that helps us understand how language works overall).  Anyway, that’s what we’re learning to do in this course.

Unfortunately, the department’s budget doesn’t stretch to sending us all off on a field trip to some remote Pacific island, so we’re simulating the experience by having a speaker of a Pasifika language come in to class to work with us.  Her language, Bislama, which is spoken in Vanuatu, is actually reasonably well described in the literature, but we’ve all had to promise not to look up any previous research on it (or even Google it), so that we can have the experience of studying a completely unknown language from scratch.  It’s really fun (in a geeky linguistics sort of way) – we spent the first two weeks getting an idea of the phonology (i.e. which speech sounds are in the language) and collecting some basic vocabulary, and this week we’re going to be working on some of the morphology and syntax (grammar).  Bislama is a “pidgin” language (actually, technically it should be called a creole), which is really interesting, because so many of the words sound almost but not exactly like English (e.g. to say “the cat is in the house”, you say something that sounds roughly like “puss-cat eestap insite long house”), but from what I know about creoles (promise I haven’t broken the rules and looked anything up – this is just general knowledge picked up from previous courses) , there should be some really interesting things going on with the morphology and syntax – and in fact, we’ve already picked up a bit of that just from the few sentences we got while we were eliciting vocabulary (that word “eestap” for example (or it might be two words, “ee stap” – I haven’t figured that out yet) – it’s possibly a copula (like “to be” in English), but it’s behaving kind of oddly and not turning up in other sentences where I would expect it to be.  So I’ve picked that as my first topic for investigation – I’m planning on eliciting a lot more sentences of the “the cat is in the house”, “the cat is on the chair”, “the cat is fluffy”, “the cat is hungry”, “the cat is sleeping”… variety in this week’s class.

Sorry, I’ve probably completely bored you all by now (not my fault – my current bedtime reading is a book called Describing Morphosyntax, so you can’t expect normal human conversation out of me!).  Anyway, in other news, after dragging on forever, we finally got our contract situations (sort of) worked out.  Unfortunately our attempt to get the programme permanently established failed (sort of – it was more of a “not right now” than an actual “no”, so we’re going to try again in a year or two), but they did at least give us decently long-term contracts this time, so I’ve got a job until the end of 2017 at least, and hopefully by then the university will be in a better financial situation so we can try again for permanence.

I can’t remember if I mentioned here that I’d applied for another job as a backup, in case CEISMIC didn’t work out.  I actually got offered the job!  The job offer came at the same time as the news that they wouldn’t be giving us permanent contracts for CEISMIC yet, so I had a few days of soul-searching while I decided whether I wanted to take the safe but relatively boring new job (which would have been a permanent contract), or stay doing what I love with CEISMIC and risk being out of work in a couple of years.  In the end I decided life is much too short to waste on taking the sensible boring path, so I turned down the new job and signed the fixed-term contract for CEISMIC.  I’m certain I made the right decision (though ask me again at the end of 2017 if they don’t renew our contracts…) – if I’d taken the other job I think I’d always be looking back at CEISMIC and regretting having left.

So yeah, I think that’s pretty much all the news.  Work and study, that’s about the entirety of my life right now.  So don’t expect to hear a lot from me here until November-ish.

See you on the other side!

emester starts tomorrow, so I was hoping to spend the weekend on a last burst of sewing to get the last two birds done.  But best laid plans and all that – I’m coming down with a cold (not *too* bad so far, but as almost everyone I know has had some variety of nasty lurgy over the past couple of weeks, it may yet be early days), so most of the weekend was spent curled up in front of the fire watching YouTube videos and bad TV, and trying, probably in vain, to shake it off before Monday.

I did have a go at one of the birds, but it really just proves that I shouldn’t try sewing when I’m sick, because apparently the first part of my brain to shut down is my spatial awareness.  Not only was I constantly making mistakes that required unpicking and resewing seams (usually because I had the fabric upside down – a real rookie mistake), or patching bits where the fabric didn’t end up lined up properly (you can see it on the tip of one of the feathers), but I also managed to totally reverse the way I’d planned to have the colours go on the bird (a wren, by the way) – my mind just wasn’t capable of thinking in mirror images today! 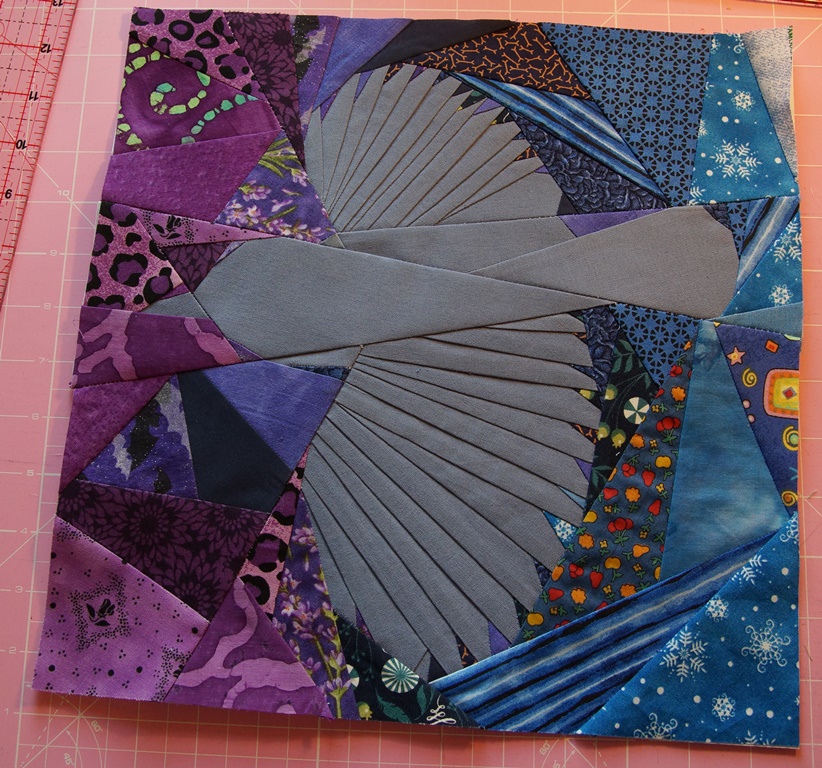 Which wouldn’t be the end of the world, except that I’d planned on combining the three birds so the colours flowed between them, and now that’s not going to work, unless I turn it upside down (hmm, I wonder if wrens ever fly upside down? They’re small birds, aren’t they? I wonder if they’re like fantails that flit and loop all over the place when they’re flying, and quite possibly do end up flying upside down occasionally…) or just start all over again and sew a new wren (which I really don’t want to do, because those wings took forever!).  A pity, because despite my mistakes it turned out looking quite nice.

Oh well, maybe by the time I get round to making the third bird I’ll have come up with a solution (or at least the motivation to start again…)

An exciting wee parcel waiting for me in the letterbox when I got home tonight (luckily well-wrapped, so it survived the day’s rain/hail/sleet/general horribleness of weather) – a pack of “charm squares” (little sample-sized pieces of fabric – no idea why they’re called charm squares, but it seems to be the standard term in quilting for fabric samples) from Oakshott Fabrics in the UK, the other half of my prize from Tartankiwi’s In Flight draw the other day. 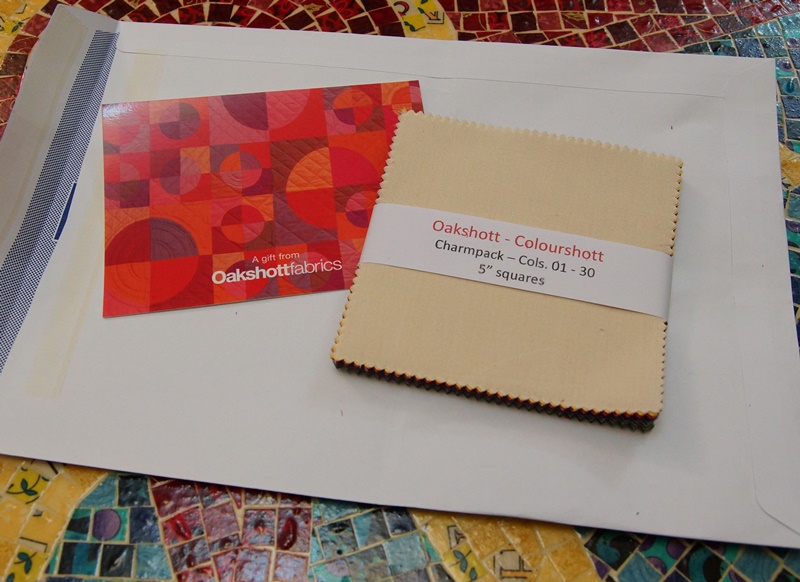 The fabric is really lovely – all sorts of amazing colours, with a subtle shot effect through it. 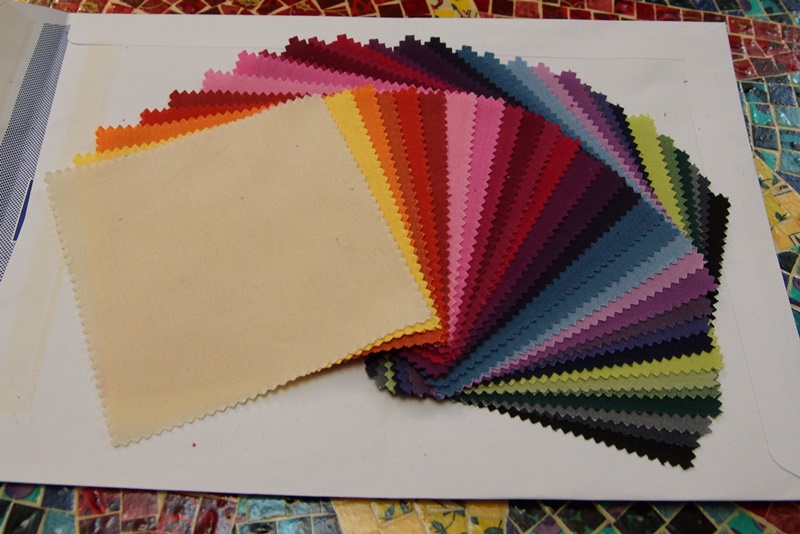 I pulled myself away from the birds for long enough this afternoon to bind my experimental quilt: 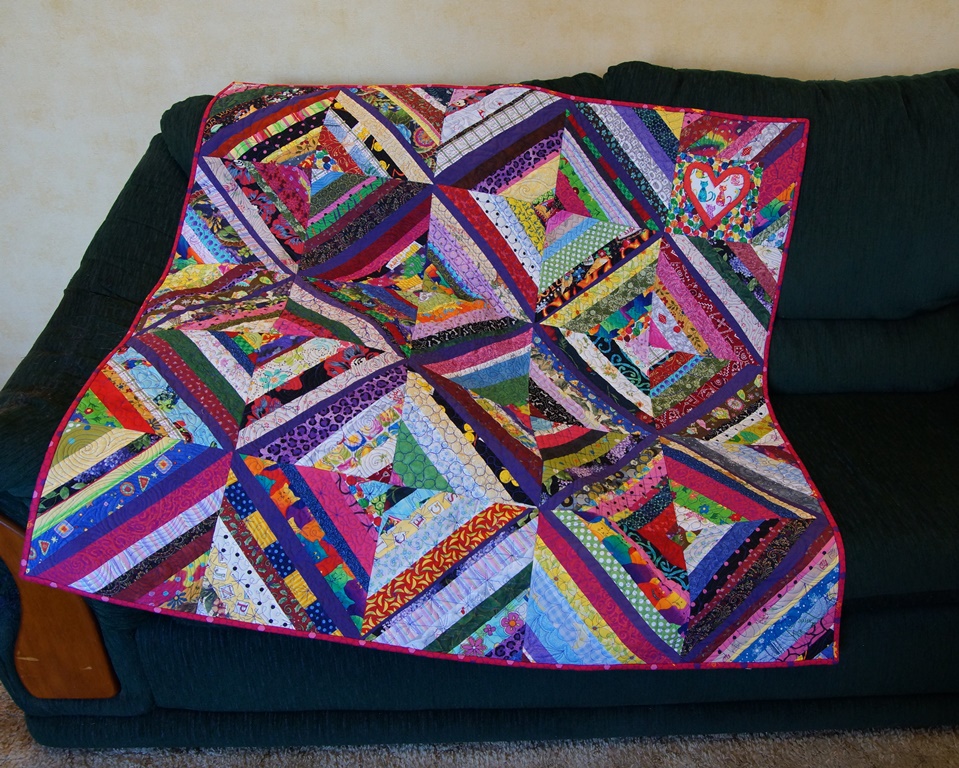 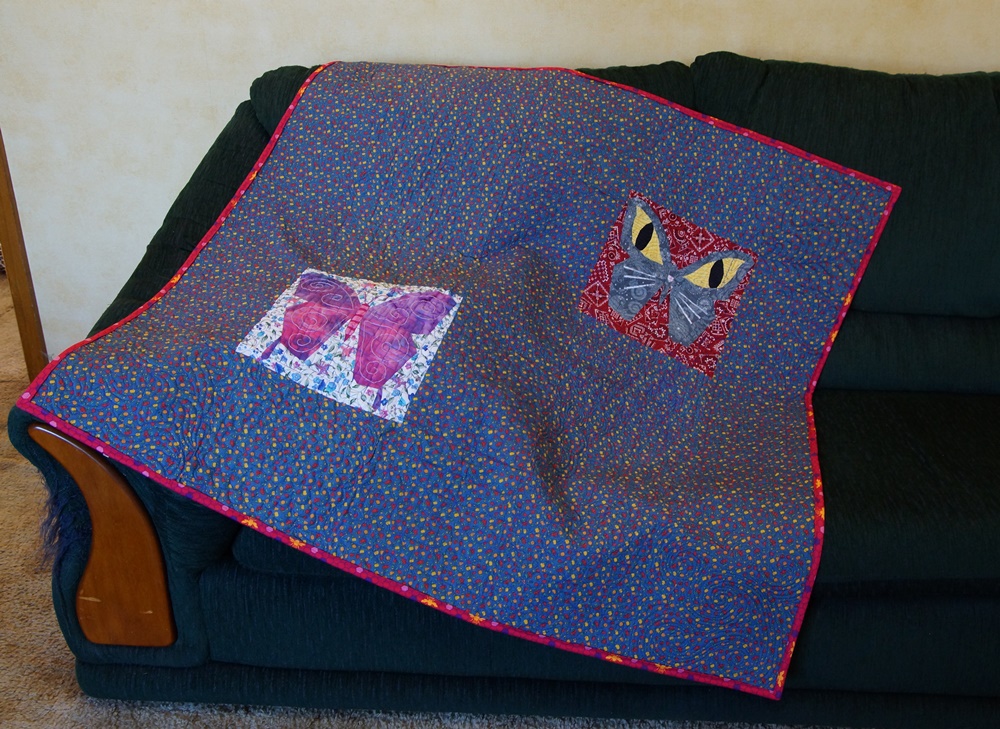 I “cheated” and machine-sewed the binding (otherwise it would have taken me weeks to hand-sew all that!), and there’s a few wee bits where it didn’t quite catch properly so I really should go back and re-do those parts, but I’m still calling it finished.

Right, someone find me a cat, a book, and a comfy corner – I need to test this thing out!

Ok, so my plan for this weekend was to put the binding on my experimental quilt.  But the three new In Flight patterns were tempting me, as was an idea I’d had back when I was making the original birds, of reversing the plain background and scrappy foreground.  I never followed up the idea at the time, because I wasn’t quite sure where I wanted to go with it.  Then I saw Tartankiwi’s rainbow zebra design, and things started clicking into place.

So, I now have a plan.  Here’s stage one of it, the hawk (with quite a few changes from Tartankiwi’s pattern): 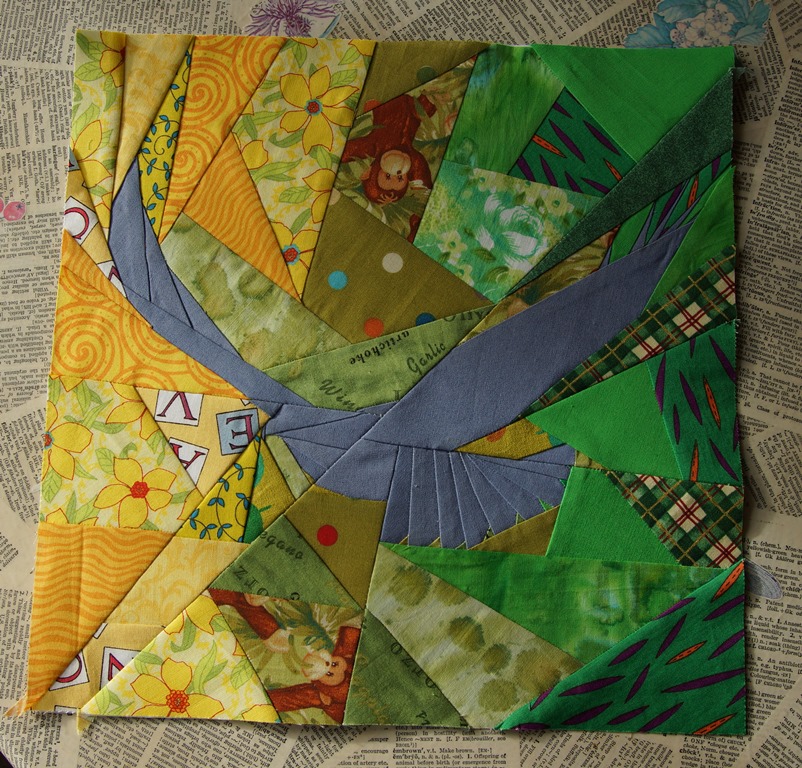 Watch this space… (although not too closely, because I’ve only got one more weekend before term starts, so progress is likely to be very very slow)

Christchurch people (and anyone else who just likes to help preserve cool historic things): If any of you have fond memories of visiting the telescope in the Arts Centre Observatory on a Friday night, you might want to contribute to this fundraiser to help restore the telescope.

It was badly damaged when the building collapsed in the February 2011 earthquake (and even more badly damaged by a digger clearing the rubble…), but incredibly, the main lens survived completely unscathed.  I got to visit the workshop in the Astronomy department at UC where one of the technicians is working on restoring the telescope, and it was amazing to hear how much work is going to need to go into repairing the parts, but how excited he is to do the work.

Built in 1864, it was a gorgeous piece of machinery, and he thinks it can be again, given time and money to do the repairs.  Every little bit helps, so donate if you can, and share this with your friends. 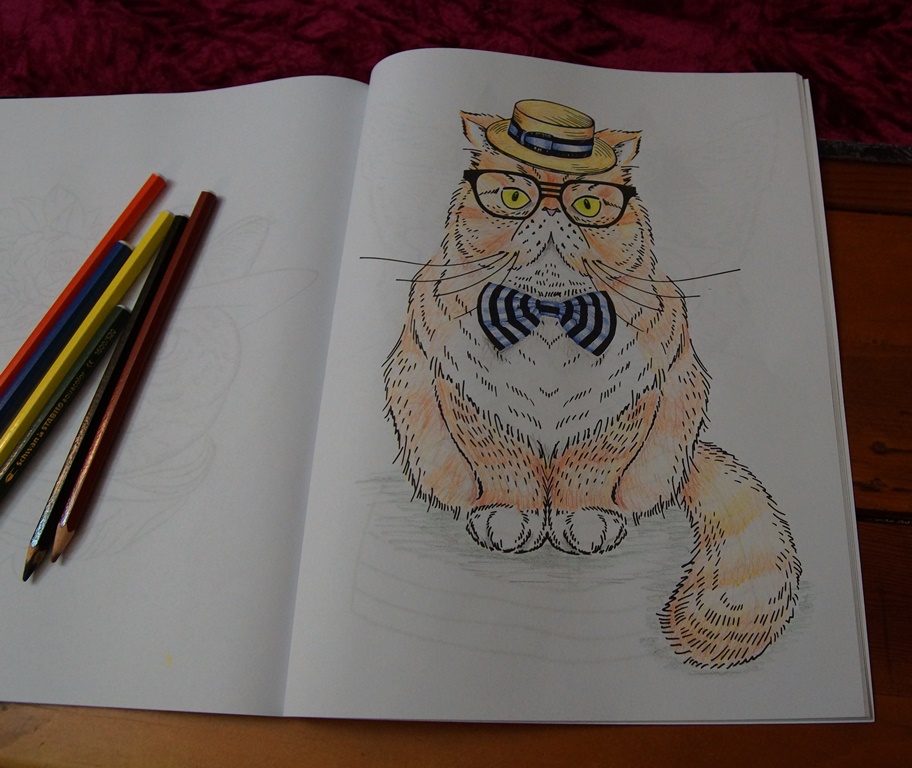 As soon as I saw that face, I just had to colour him to look like Raji! (I don’t know if I got his markings exactly right, Mum, but don’t you agree that’s totally a Raji expression he’s got on his face???)