eing an archive for the Canterbury earthquakes means 22 February is a big day for us at work. It fell on a Saturday this year, but that just meant we had one less day to prepare, because we had to have a major collection ready for launch on the 21st instead.  And of course, the anniversary had to coincide with our website getting all glitchy (luckily nothing too bad went wrong with the public-facing side, but behind the scenes everything was taking us twice as long as it should have) so it was a bit of a panic last week getting everything done in time.  But we managed it, and could proudly present our latest work to the Mayor on Friday evening.

Which is a long-winded way of introducing the fact I got to have drinkies with the Mayor and a bunch of other VIPs on Friday night.  And meet several earthquake survivors (ok, so in a sense we’re all survivors, but these were of the “trapped in a fallen building and had to get rescued” type survivors, not just the “that was a bit scarey but the building is still upright and I can walk out” variety the rest of us are), which was wonderful.  It actually turned out to be quite an enjoyable evening (against my usual expectations for these sort of official functions!), which I spent talking to some really interesting people.  Got my photo in the paper, too (well, sort of – I’m in the background of a picture of someone else).  Don’t worry though, I won’t let the fame go to my head 😉

Once again there was a community-led River of Flowers commemoration alongside the official memorial events on Saturday, so I opted to go to the one in Deans Bush.  Unfortunately, it being Saturday it coincided with the farmers’ market, which, combined with a lack of signage meant that the River of Flowers people ended up split between two locations, and no clear way of signalling when the minute’s silence was supposed to begin (and it wasn’t all that silent anyway, because the market was still going on in the background).  But despite the hiccoughs and what seemed like a poor turnout (because half the people were in a different spot), it was still a moving experience, sharing our memories of the day and of what we’d lost.

We had a huge thunderstorm pass through yesterday (apparently it was officially a super cell, and there were even a couple of tornadoes!).  Almost constant thunder for half an hour or so, and massive amounts of hail (pretty big hailstones too – most of them looked around the size of peas).

I wouldn’t have liked to have to be out in it, but it was amazing to watch from the window: 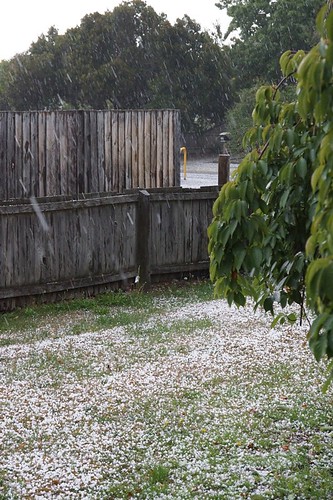 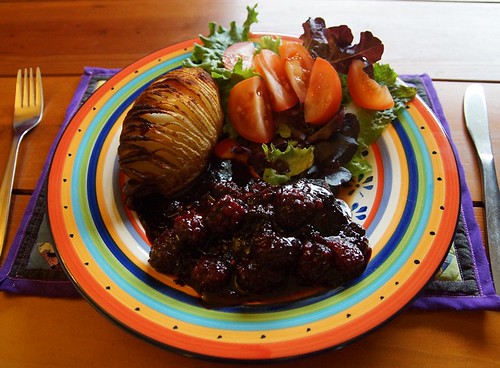 My brother and SIL were in town again this weekend for another wedding, so they popped by yesterday morning to drop off some bits and pieces from Mum (mostly random kitchen items I’d been eyeing up from a pile she was clearing out last time I was down there – most exciting being a decent sized stock pot that I can use for bottling), plus a chilly bin full of venison and rabbit.  Some of it was in the form of back steaks, which are the most tender part of the deer, so I decided to try my hand at actually cooking one up as a steak (rather than the slow-cooked casserole which is my usual approach to wild meats).  Steak is something I’m yet to master the technique for (I know the theory, it’s just getting it to work properly that’s the problem – probably because I cook it so infrequently that I haven’t had much practice), but apart from it being a little black in places on the outside, it actually turned out pretty well.  Definitely wasn’t tough, which is the main thing. And I found a nice recipe for a boysenberry sauce to go over the top (actually, the recipe was supposed to be for a blackberry sauce, but who has blackberries just lying around?  I reckoned boysenberries were close enough…).  Add in a fancy roast potato and some salad, and dinner was definitely a cut above my usual Sunday night throw something together 🙂

eleasing all those books at the weekend gave me quite a few catches.  As well as the one I got on the day, I’ve had three more (three new members, too):

Not bad going!  And looking in my catches folder in my email, there’s been a steady trickle of catches from older releases, too:

I went out for dinner with Harvestbird last night, to celebrate a year of freedom on my part, and a belated birthday on hers. Our conversation, as usual, veered wildly from the deeply intellectual to the incredibly mundane, reminding me how much I’ve missed our regular lunches, which, for a variety of reasons, we haven’t been able to keep up with lately.  In the space of a few minutes we can go from sexual politics to blogging as performance to the toilet training antics of her children.  What more could you want from a dinner companion?

A lovely night, even though I missed out on the promised ogling of the gorgeous young Brazilian barman… 😉

It poured with rain last night, and it looks like the temporary fix Lytteltonwitch’s brother did to my roof didn’t entirely fix the leak problem, because there was a damp patch on the carpet below this morning 🙁  Think I might have to find a real builder and get it properly fixed… (easier said than done in Christchurch – they tend to all be booked out for the foreseeable future).

I’ve almost survived a whole week of being a managerial type, and so far it’s going well.  I’ve learnt the value of a chain of command – when a problem’s too tricky to deal with, you’re allowed to solve it by sending it up the ladder to the big boss (who I’m sure does his own share of escalating to his boss and so on all the way up to the VC…)  So far there’s only been a couple of those situations though, and one was actually just to confirm I was on the right track.  So I’m feeling, if not confident, at least adequately competent.

oday marks 11 years since I joined Bookcrossing. Not that I’ve done a huge amount of bookcrossing in the last year or three – I got out of the habit with the earthquakes and never really got back to it. Not having any other active bookcrossers in the area doesn’t help much either. I’d blame the loss of the wonderful St Christophers three books for a dollar table, but that’s not really an excuse, given the three boxes of unregistered books still sitting under my desk…

Anyway, today I did release some books – 11 in fact, in honour of 11 years of Bookcrossing. All cat themed, of course 🙂

And one (The New Cat Handbook) even got caught, before I’d made it home to make release notes!

I ended up releasing all of them in Deans Bush.  My original plan was to start there, release a few books, then wander down to Hagley Park and into town, dropping books along the way.  But the farmers market was still going when I got to Deans Bush, so I thought I’d grab a nice loaf of bread while I was there, to have for dinner tonight with some soup I’ve got sitting in the fridge.  But of course, farmers markets don’t work like that – while searching for the bread stall you have to walk past all the other stalls selling assorted wonderfulness, so before I knew it I was weighed down with a bag of peaches, a bag of tomatoes, a couple of little savouries, a slice of cake (in my defence, it was a Cakes by Anna cake – totally impossible to walk past!)… oh yeah, and the loaf of bread I’d actually planned to buy.  So I had to quickly release the rest of my books to make room in my bag for all those goodies 🙂

Still, at least I managed to release some books for a change, and it was a very pleasant way to spend the morning.  And will make for an even more pleasant evening, feasting on all that lot 🙂

My boss’s baby finally arrived yesterday morning, nearly two weeks late (so I could have taken my time getting the quilt finished after all!), so I’m now the acting manager for the next few weeks while he’s on parental leave.  I had been feeling kind of nervous about the impending responsibility, but I was actually feeling pretty relaxed about it yesterday – though maybe that’s just because of the general feeling of relief around the office, after spending two weeks with the boss getting more and more tense and leaping for the phone every time it rang 🙂

I’m sure there’ll be sufficient crises over the next few weeks to keep me busy though – with the anniversary coming up on the 22nd we’ve got a few big projects that we’re trying to get finished in time to do a big release for that day, and of course they’re all dependent on other people to sign off on various things at critical stages, so I’m expecting I’ll be having to earn my new pay band pretty soon making sure that all goes smoothly.

In the meantime, I intend to usher in the new regime by baking some cake or something tomorrow to take in for morning tea on Monday.

In sad news, Browsers is closing 🙁  The building is being demolished (not earthquake damage, by the sounds of it – the building owner just wants to build something new on the site), so the cafe has to go, and its owner says she doesn’t want to reopen anywhere else. Where will I get my fix of lemon cake* now???

Hmm, perhaps it’s a good thing we don’t have bookcrossing meetups in Christchurch any more – it seems like every place we’ve ever had a meetup gets demolished.

(*Ok, so cake seems to be the theme of today’s entry.  I’m not obsessed with cake, really!)

Parsnips seems to have started a feud with the next door’s cat.  She’s normally pretty relaxed about other cats, but there’s a big black and white cat next door that she really can’t stand.  Every time she sees it in the garden her fur goes up and she starts hissing, and there’s been more than a few fights when they’ve met at the fence line (I’m amazed at her bravery, given that the other cat is twice her size!).  Even seeing it through the frosted glass of the front door is enough to get her agitated.

No idea what it is about that cat that gets her so agitated, but I hope they manage to sort out their differences – the last thing I need is her to get injured.

(See, not a single mention of cake in this section! …except for just then…)