The good news is, I finished the machine sewing part of the minecraft face mats. 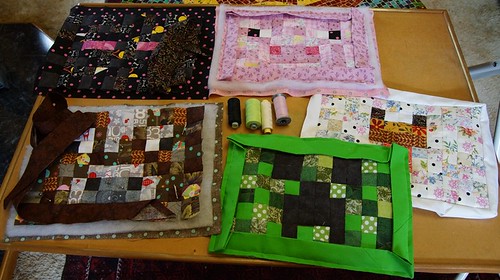 Work in progress – mats at various stages of completion. 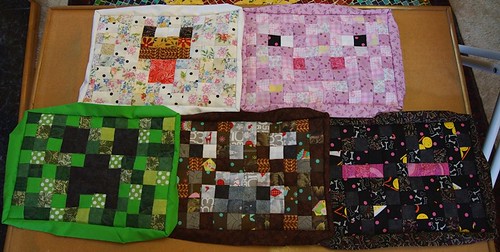 Of course, that means the bad news is I’m up to the hand-sewing part.  Which is the slow and difficult bit (well, it is if you’re me, anyway – somehow, despite being relatively skilled with a needle when it comes to embroidery, when faced with normal sewing I become a fumbling idiot again).

But at least it means I’ve finally been able to put the sewing machine away and restore the lounge to some semblance of tidiness.

The pre-Christmas social season is warming up, and my calendar is starting to fill.  Which is good, but also a bit exhausting – there’s a definite limit to how many social engagements I can manage before I have to go and curl up in a corner somewhere and recharge my introvert batteries.  But mostly it’s a fun time of year – and with the added enjoyment this year of knowing I can attend as many things as I like without having to feel guilty for being out all the time.

I may even throw a party of my own – not many Bookcrossers left in Christchurch now for the once-traditional Bookcrossing Christmas meetup, but I’m sure I could reinvent it as a more general friends-of-FutureCat event 🙂

The season kicked off on Friday night with a get-together of a bunch of women from Toastmasters.  It was a pot-luck at one of the women’s house, and lots of fun. I made brownies (I’ve almost perfected the chocolate-caramel-sea salt recipe), which went down very well.  Definitely a great group, and very welcoming – I’ve been made to feel like one of the gang right from the start.

I realised that in the great DD-breaking of last weekend, I didn’t actually get round to writing the entry I’d sat down at the computer to write when I found myself locked out of the site, being a summary of what I did at Show Weekend.  I wrote about the sewing part, but not the rest of the weekend’s events, the highlight being going with Harvestbird to the National Day of Action Against Rape Culture rally in town.

Some background for the benefit of the foreigners: rape culture has been in the news in NZ recently with the uncovering of a website devoted to obnoxious thugs boasting about how many young heavily-intoxicated women they’ve had sex with.  As well as the usual talk-radio idiocy about whether the women were “asking for it”, there’s been controversy around the fact that it seems the police have known about the site for some time, but hadn’t acted, possibly because none of the women had come forward with formal complaints (though there’s some dispute about that).  Anyway, the whole thing has highlighted the fact that (a) there’s still a sector of society out there who have some pretty hazy ideas about what consent means, and (b) there’s a lot of rape and sexual abuse going on that’s either not reported or not prosecuted, because (c) the culture still puts a lot of blame on the victim.

Hence the National Day of Action, with rallies organised in the main centres.  The Christchurch rally wasn’t hugely well attended (it’s difficult to get a crowd together in Christchurch these days to protest anything that isn’t EQC or CERA), but the couple of hundred of us who did show up made a good attempt at making as much noise as a larger crowd, and we did pick up a few more as we marched through Re:Start towards the Square.

There were some very good speakers at the rally too (and some not so good – it was kind of ironic that the microphone was held hostage for far too long by a man who liked the sound of his own voice a little too much…), and it was especially moving to hear the survivors who were brave enough to stand up and publicly tell their stories.

Of course, as these rallies always are, it was all very much preaching to the converted, and if I was feeling cynical I’d say nothing will change as a result of the Day of Action.  But it’s still got to be better to stand up and add one small voice to the chorus saying “this isn’t ok”, than to hide your head in the sand and try and pretend it’s not happening.