Thanks everyone for your kind comments about Pushkin.  No sign of her yet, and no response to the flyer I circulated around the neighbours, but I won’t give up all hope just yet.

So, I mentioned Queenstown briefly in the previous post, but only as an aside to the main item, so those bookcrossers among you who weren’t at the unconvention are probably waiting for a report on how it went.

Short version: it was great.  Lots of fun, everyone seemed to enjoy themselves, and our strategy of minimising organisation worked out fine.

Ok, now for the longer version, with photos 🙂

I actually flew down to Queenstown on the Tuesday, but my destination was actually Alexandra.  It seemed crazy to spend the weekend that close by without spending a few days with my family, so I planned a couple of days either side of the convention to visit them.

There was also the slight motivation of hitting Mum’s craft room to create a few bits and pieces to add to the wee prize packs I’d put together for the release walk: 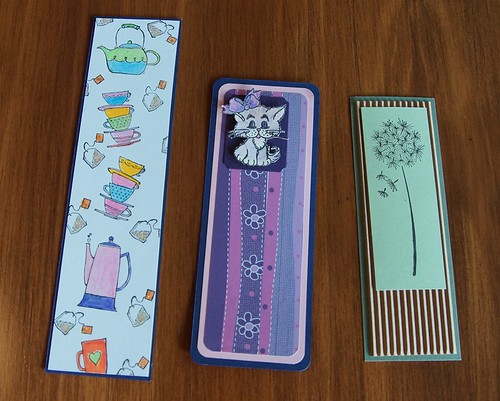 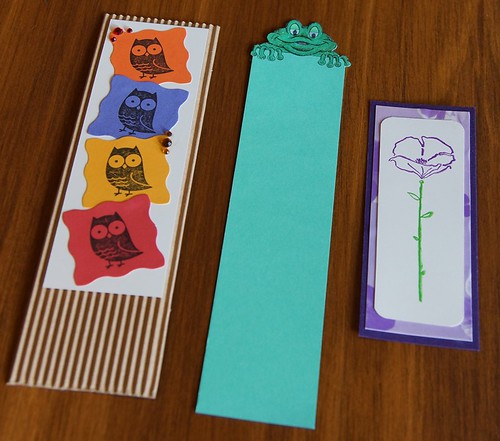 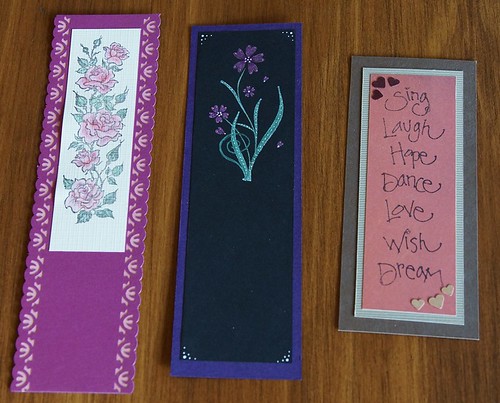 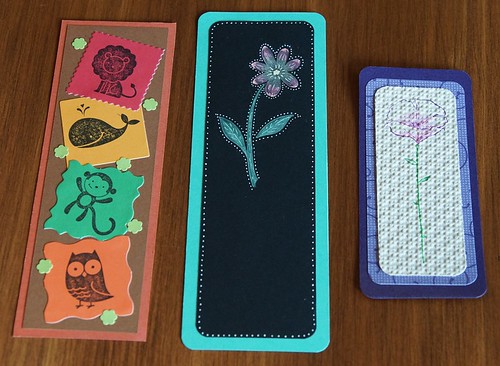 On Thursday Mum drove me up to Queenstown, via Arrowtown, where we stopped for a lovely lunch in a French cafe, and picked up a few treats in the old-fashioned sweet shop. We also had an unscheduled stop in the Kawarau Gorge, when we had to pull over to let a house go past: 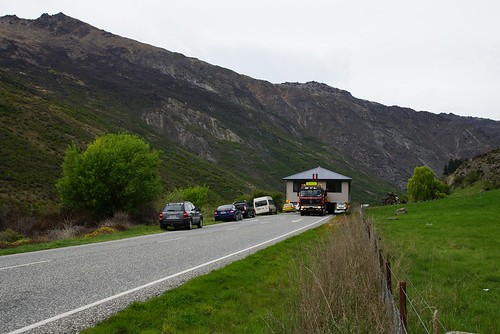 Note how little room there is between the house on the back of that truck and the fence that runs beside the road. Note also that I’m standing beside that fence, where I was taking advantage of the stop to take a photo of a tumbledown house on the side of the road, not thinking about the logistics of the house going right past me on that side of the road. I was holding my breath as it went past, trying to squeeze myself flat against the fence! 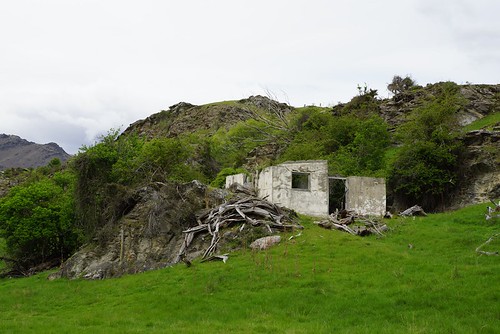 In Queenstown I met up with EdwardStreet, my room-mate for the weekend, and KiwiinEngland (who had the suite-sized room next door, which became party central most afternoons). After organising ourselves and a few drinks (see previous parentheses) we headed to the first unofficial event of the weekend, a pre-convention gathering at a pub on the waterfront. Despite slightly confused directions, everyone who was already in Queenstown managed to find us, and we ended up with nearly 20 people around the tables, the Australians completely outnumbering the New Zealanders (a first for a NZ uncon!). 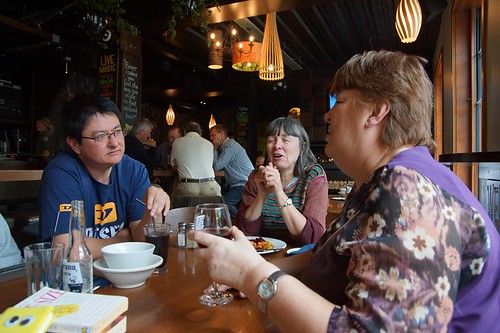 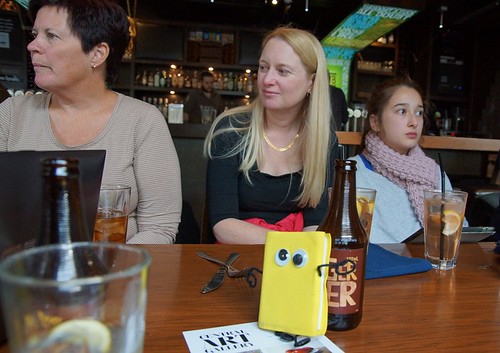 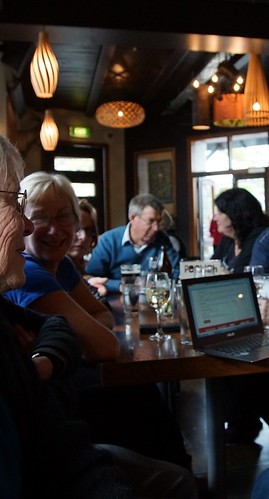 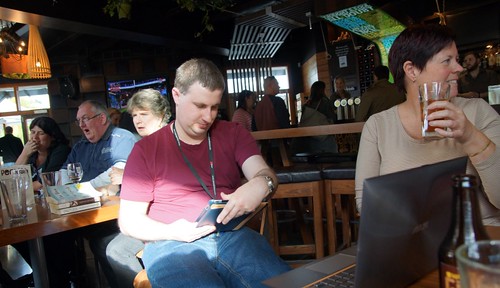 The next day started with a spectacular thunder storm, waking us at about 5 am with huge flashes that were lighting up our hostel room even through the closed curtains. A couple of hours later when I ventured out in search of breakfast, the lightning had stopped, but the rain was still persisting. The forecast promised improvement, but I still watched the skies anxiously all day, worried about Saturday’s release walk.

I had made plans to meet up with Lakelady when she arrived (she’d been down in Te Anau (which she managed to pronounce wrong in a different way every time she attempted it all weekend, no matter how many times the Kiwis attempted to teach her – it became a bit of a running joke asking her where she’d been) for a few days), because she wanted to go up the gondola, and that’s one tourist attraction I’m happy to do any time I’m in Queenstown – the views are just so spectacular. The rain persisted all afternoon, though, so the only views we would have got were of the inside of clouds (if you can hardly see the top of the gondola from town, that’s a pretty good clue you won’t see much from up there!), so we gave up and just wandered around town. 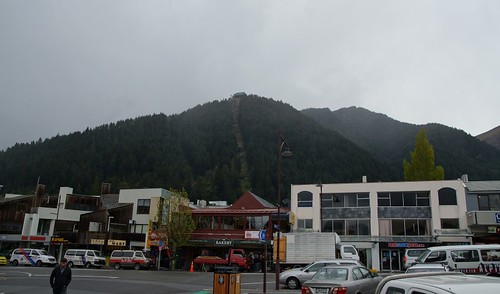 We caught up with a few of the others at the Salvation Army’s op shop (= charity shop selling second-hand clothing, for those of you from foreign parts). That might seem a strange place for everyone to gravitate to, but Queenstown is full of rich tourists, who often need to dump a few items from over-full suitcases. Which means the op shop, instead of being full of cheap worn-out clothes like most op shops, is instead full of hardly-worn expensive brands, but still at op shop prices. I managed to buy myself a really nice top and a winter coat for about $20 each (they probably would have been about $100 and $200 new), and everyone else left clutching bags of bargains too.

That night was the official kick-off of the uncon, dinner in another pub.  We had an upstairs area to ourselves, and there was even space for a book table, which quickly began to fill. 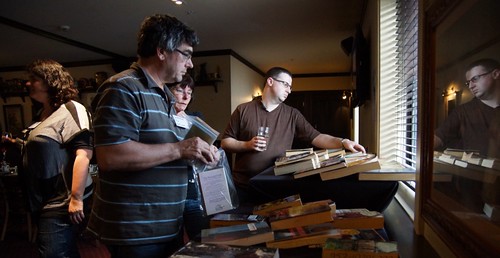 Also making an appearance was what’s certainly NZ’s (and maybe the world’s?) first Ballycumber tattoo (yes, it really is a proper tattoo, not just a fake temporary one like I’ve sported at many conventions), on one of NZ’s first bookcrossers: 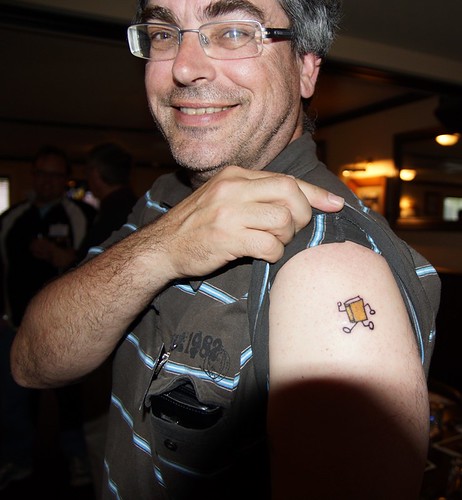 More and more bookcrossers began to appear, but two were missing: Skyring and Newk. Word soon came through via Facebook that their flight into Queenstown had been diverted back to Christchurch, so they’d hired a car and were driving the 5 hours up into the mountains. Amazingly, they did manage to make it just in time for dinner.

After dinner the live music started up in the bar downstairs, so most of us relocated to a quieter bar where we could talk in relative peace.

I was up early again on Saturday morning. Because I’d arranged a surprise for the release walk that needed me to stay in a particular place for the whole day, I wasn’t going to be able to do the release walk myself, so I set out early to release some books around the town. Thankfully it was turning out to be a glorious day, lovely and sunny (though with an icy wind blowing across the lake). 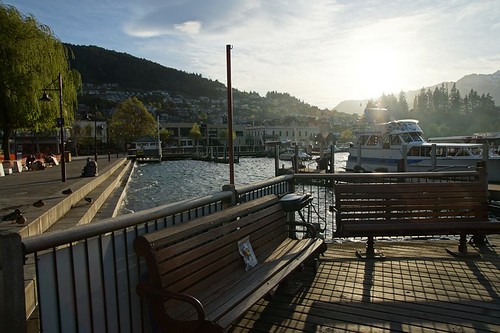 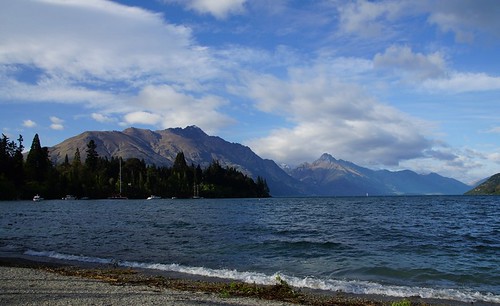 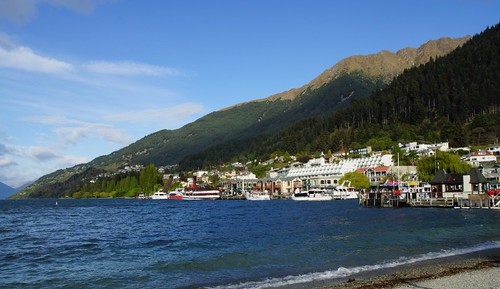 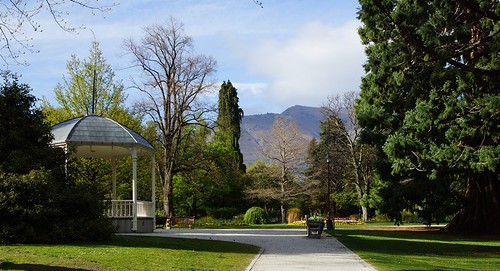 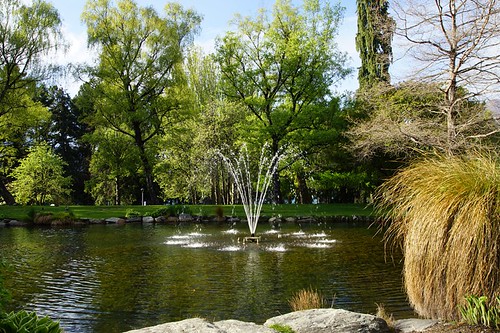 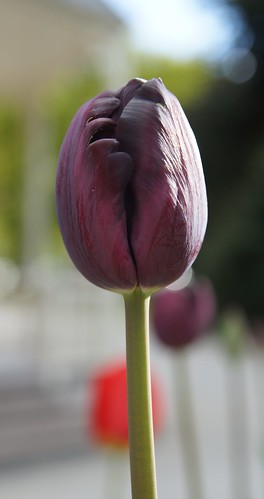 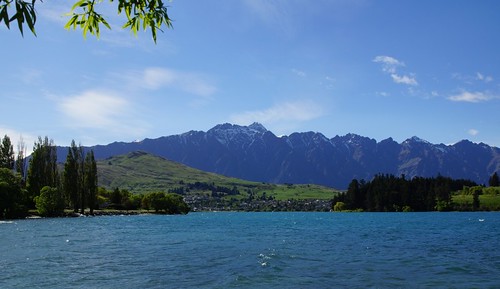 At the scheduled start time for the walk I met up with everyone to distribute maps and instructions, then raced over to the spot on the Frankton Arm waterfront where I’d arranged to meet my co-conspirators for the surprise, Dad and Nephew #1. They’d brought Dad’s boat up from Alexandra, so when the groups of Bookcrossers arrived at the designated spot mid-walk, they were surprised with a boat ride across the lake (well, across the Frankton Arm, anyway – it was too windy and rough to take them out onto the main part of the lake) to Kelvin Heights. 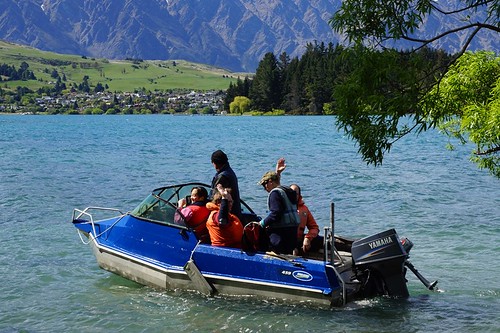 My complicated planning of the release walk (different groups got slightly different instructions, so they’d all cover the same ground eventually, but would arrive at the boat at different times) worked out really well, so nobody had to wait too long for their turn, and Dad and Nephew #1 were kept busy ferrying them back and forth across the lake. And I managed to spend a lot of time getting drenched with icy cold lake water – every time I stood on the little jetty we were using, a wave would splash up over the jetty just as I was reaching over for the rope to pull the boat in!

It was so worth it though – everyone loved the surprise, and some even said it was the highlight of the weekend.

Another meal that night, this time in a very noisy pizza restaurant, where the rugby game on the TV drowned out any attempt at conversation.  As a result, most of us moved on as soon as we’d eaten, returning to the nice quiet bar we’d found on Friday night.  It meant we never really got to do a prize-giving for the release walk (as per Dublin, there were questions to answer along the way, with prizes for the most correct) – I just went round the tables and gave the winners their prizes without any fanfare.

All too soon it was Sunday morning, and our farewell brunch.  As I get to know more and more bookcrossers, a weekend never feels long enough to get a chance to talk to everyone as much as I’d like (especially as it usually takes most of the first day for me to overcome my natural shyness and actually circulate instead of hiding in a corner).  It was a wonderful weekend though, with many old friends caught up with, and a few new friends made.

Back in Alexandra that evening, my brother and his family came round to Mum’s place for the first barbecue of the season.  Brother had been out hunting, so there were such exotic (and incredibly tasty) offerings as hare patties, and crumbed rabbit nuggets. 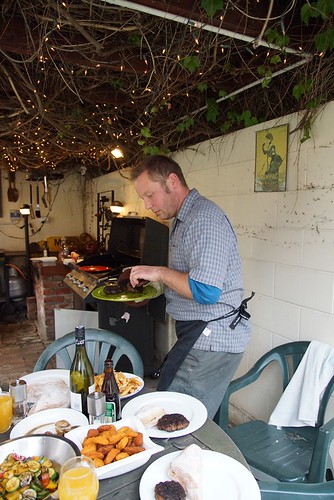 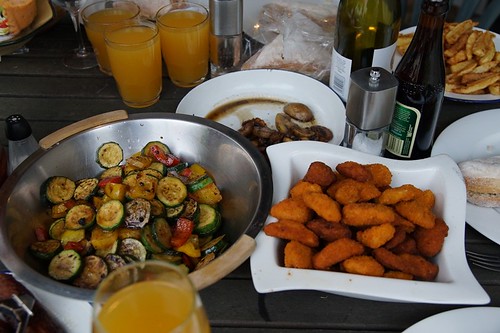 We rounded off the evening with a parlour game that was a cross between Pictionary and Chinese Whispers. The idea was everyone wrote a word or phrase on a piece of paper, then handed it to the person to their right. That person had to draw what was written, then folding over the paper to hide the words, pass their drawing to the next person round. That person then guessed what the drawing was of, and hiding the drawing, wrote down their guess and passed it on again to the next person, who had to draw what was written and so on. By the time the drawings had been round the table they ended up with very little resemblance to the original words – a politician kissing a baby ended up as an operating theatre, for example. Revealing the chain of words and drawings at the end of each round led to much hysterical laughter!

The rest of the next couple of days were similarly filled with family meals, lots of fun times with the kids (and a lot of minecraft, of course), and a generally lovely relaxing holiday (though I was utterly exhausted by the time I got home!).

And to finish, a couple of photos of the cute: 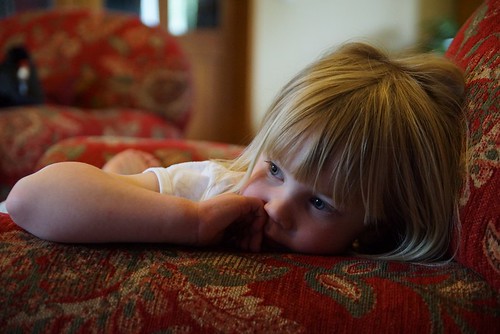 Niece, totally absorbed in a cartoon on TV. 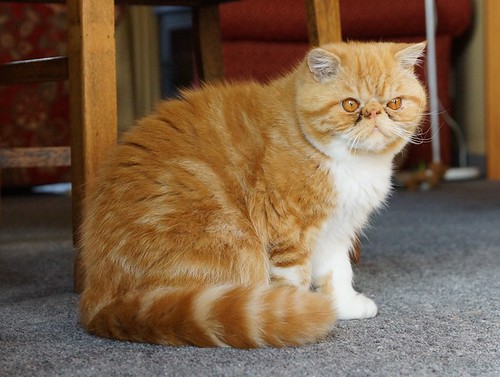 Raji, who’s grown hugely since I was last down there, but is still terrified of everyone except Mum.

10 thoughts on “Queenstown and things”